History in the Limelight Conference

Taking place from 8 to 10 September 2016 at the UCL Institute of Education, London, and organised by the ‘Redress of the Past’ team, this conference investigated the ways in which history has been performed in the modern world. It brought together participants from different countries and disciplines to consider how communities, institutions and groups have presented history in dramatic forms over time.

Acknowledging the growing body of scholarship on historical performance, often involving researchers from different disciplines, this conference was aimed at scholars and practitioners across the disciplinary spectrum, including history, theatre and film studies, sociology and anthropology, the visual and performing arts, music and literature, folklore, education and cultural studies broadly defined. It also involved contributions from the heritage and information sectors. The aim of the conference was to range across different national and transnational contexts in its exploration of historical pageants and other forms of historical performance.

• how has history been presented in dramatic form to different audiences? What meanings are associated with participation in, and observation of, historical re-enactments and dramatic performances?

• how has the nature and cultural significance of historical performances changed over time?

• how important is ‘authenticity’ in historical performance?

• what does the dramatic presentation of history tell us about personal, local and national identities, and about public interest in the past?

• what is the relationship between historical performance and other forms of cultural engagement with the past?

• what are the ethical implications of representing history in dramatic form?

• what insights can be gained from comparative perspectives on historical performance?

• what contributions did (and can) the performing arts make in the heritage sector, popular history, and history education?

Reflecting the central role of the ‘Redress of the Past’ team in organising the conference, five plenary speakers focused on historical pageants. Paul Readman opened the conference by presenting some of the main themes of the ‘Redress of the Past’ project. On the first evening, there was an enjoyable session featuring Joy Thompson’s memories of the pageant that she organised in Exeter in July 1997, and an account by Ellie Reid, a noted collector of pageant memorabilia, of the artefacts generated by the pageant movement in twentieth-century Britain. On day 2, there was an opportunity for delegates to see a video of the Exeter pageant. The second evening saw a plenary lecture by Joanna de Groot, on a historical pageant in a very different context from twentieth-century Britain: the Persepolis pageant staged by the Shah of Iran in 1971. To end the conference, Deborah Sugg Ryan told us about the 1924 Pageant of Empire at Wembley – a new modern form of spectacle that looked very different from many historical pageants of the time, and addressed imperial themes explicitly in a way that many of the local pageants of the time did not. 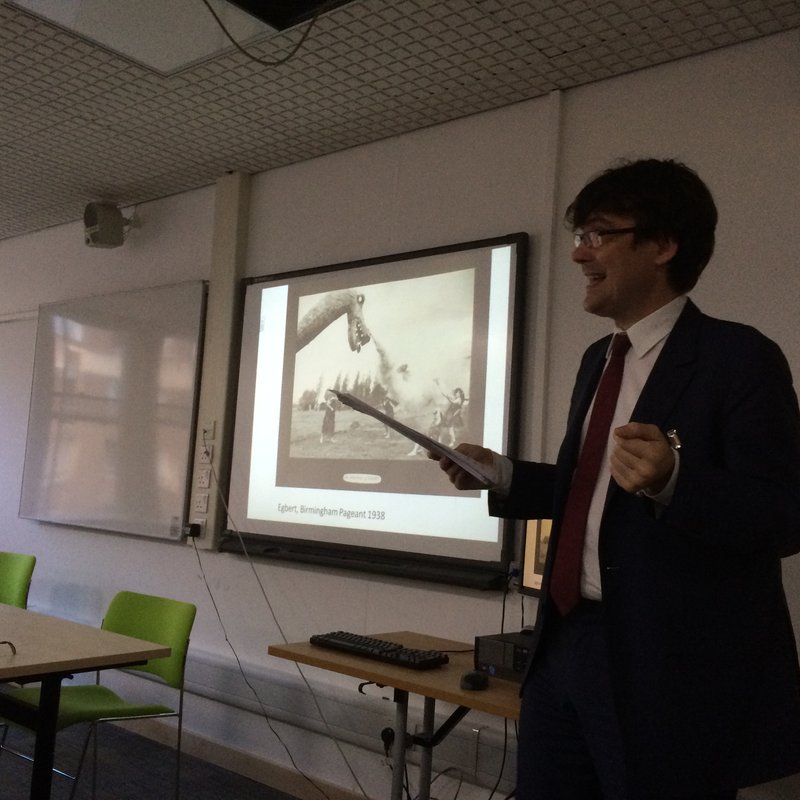 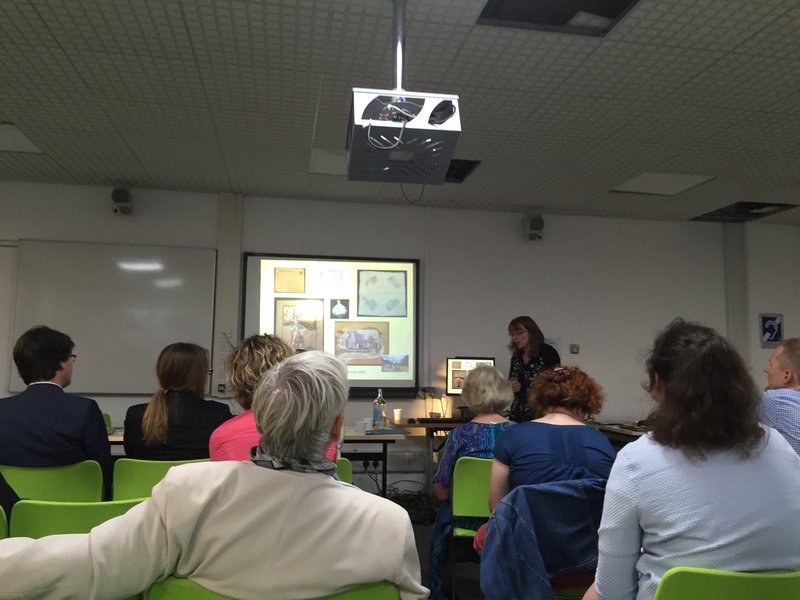 Unsurprisingly, perhaps, many of the papers given in the parallel sessions also featured pageants. Andrew Walker, for example, presented a paper on the pageant at the Preston Guild in 1922; Chris Tuckley spoke about the depictions of the Vikings in English pageants; Michael Shaw examined the pageants of Patrick Geddes in Edwardian Scotland; Daryl Leeworthy considered the South Wales miners’ pageants and Tom Woodin the pageants of the Co-operative movement; Zoë Thomas gave a paper on female-organised pageants, and Amy Binns on post-suffrage pageants; Arthur Burns and Alexander Hutton both discussed Christianity in historical pageants, Burns dealing with the huge English Church Pageant of 1909 and Hutton with a small village event;  and there were many more. Knowledge of historical pageantry goes much wider than we anticipated when organising the conference – indeed, there is academic interest beyond Britain, as seen in Tanja Vahtikari’s paper on post-war Finnish pageants.

Other papers dealt with a wide range of themes beyond the immediate concerns of the ‘Redress of the Past’ project. Historical re-enactment was a theme of some contributions: Amanda Tewes presented her critical observations of violent re-enactments in the American ‘faux west’; Laura Forster considered a street-art Parisian re-enactment of the events of the Paris Commune; and Wojciech Bejda considered the issues of ‘accuracy’ and ‘authenticity’ that are significant themes in the literature on re-enactment. Film, radio, photographs and literature featured in contributions from Heather Norris Nicholson on an HLF-funded project that uses surviving film of interwar village pageants to prompt local historical research and the creation of a new pageant in a south Pennine village; Laura Carter on historical dramatisation on the BBC in the 1930s; Elizabeth Edwards and Victoria Musvik on, respectively, pageant photographs and Russian photographic re-staging of historical paintings; and Maxine Burton on the interpretation of Victorian novels. Richard O’Brien considered the dramatisation of theatrical history, particularly the character of Shakespeare, both in film and on stage; and Peter Yeandle, in one of the few papers that looked mainly at the nineteenth century, explored the long history of theatrical re-enactment of spectacular historical episodes, focusing on the extravagant shows that took place at Belle Vue in Manchester – spectacles that were a mixture of theatre, light shows, zoo and circus. This paper drew attention to imperial themes, which were also addressed in Brian Wallace’s contribution, where the origins and uses of the myth of Jessie Brown, a Victorian Scottish/British heroine of the Indian rebellion, were dissected and analysed.

As well as these and other historical contributions, some papers discussed recent and contemporary issues in the popular representation of historical subject-matter. New media featured in Yair Lipshitz’s paper, which drew on his experiences with an online role-playing game, Age of Intrigue, set in Restoration London, while Chris A. Williams reflected on his involvement in the TV documentaries Wartime Farm and Victorian Farm, and Joseph Maslen discussed the political context of the BBC’s Maid Marian and Her Merry Men (1989-1994). Dion Georgiou considered the treatment of industrial relations in the recent British films Pride and Made in Dagenham, while Adele Patrick, representing Glasgow Women’s Library, showed the film March, which tells the story of how the Library and its volunteers re-enacted the suffragette Pageant of Great Women, and brought it up to date, in 2015. Laura MacDonald considered what the ‘jukebox musical’ Beautiful, based on the life and music of Carole King, can contribute to feminist historiography. 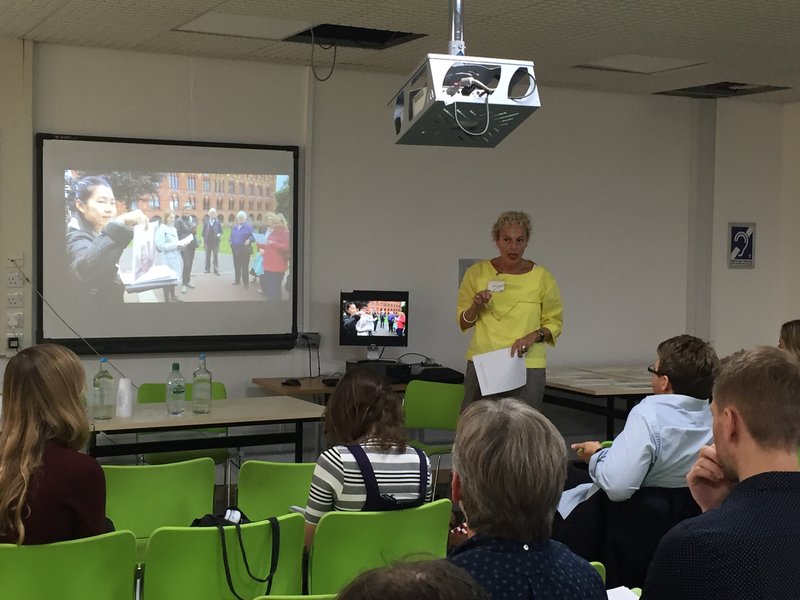 The range and quality of papers presented at ‘History in the Limelight’ is evidence of a thriving field of research into the popular contemporary and historical representation of the past in dramatic form. Although the main focus of the conference was on Britain, there were some important contributions on international topics and by international speakers; there was also a range of disciplinary approaches, which was a welcome feature of a conference organised by a project team whose focus is mainly historical.

The conference also provided an opportunity to shown some of our exhibition material from Bury St Edmunds, Carlisle and Scarborough, prepared in association with our project partners.

We are immensely grateful to the many delegates who have written to us praising the academic quality of the conference and the conviviality and friendliness of the proceedings. We are grateful to the UCL Institute of Education for providing an excellent venue and extending its hospitality across three fruitful and enjoyable days. The full book of abstracts can be viewed and downloaded using the link below. 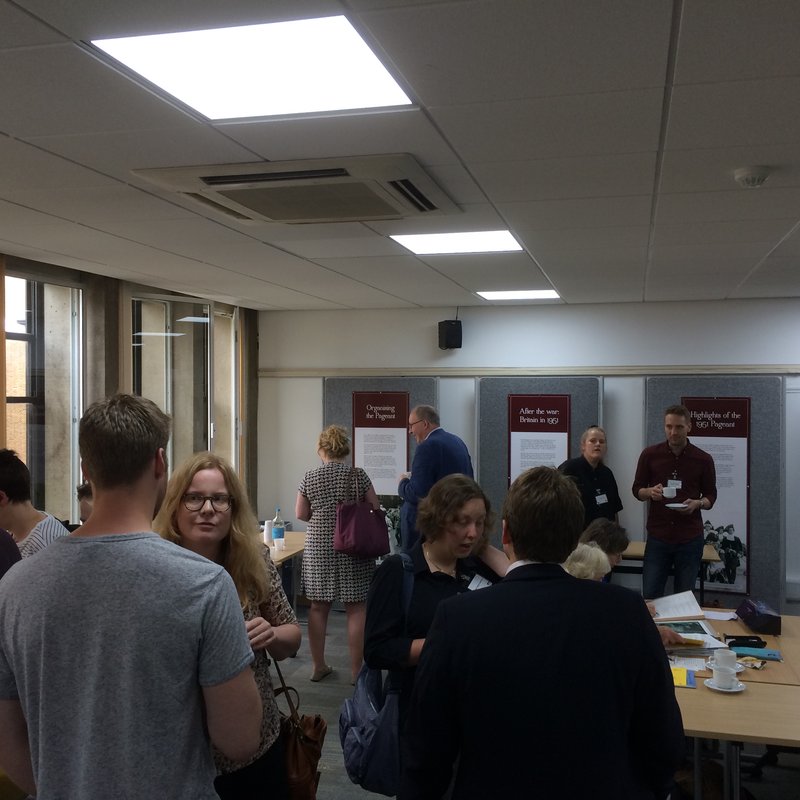