On Friday 22nd June we staged our first film evening at Moyse's Hall. We were blown away by the enthusiasm for this event - 50 people came, a full capacity, and our other two showings are equally booked out. After Paul introduced our project, gave a description of the eruption of 'pageant fever' across Britain in the early twentieth century, including Bury St Edmunds's own 1907 pageant, I played a few clips from the surviving recording. I gave a voice-over, explaining what was happening in each scene, since the recording had no sound - a new experience for me! A couple of moments seemed to stand out to the audience. Firstly, a scene featuring the murderous and traitorous Bern, a local falconer who had killed Edmund's Danish friend, King Lothparck. After Bern had been outcast by Edmund, he had been found by the Danes. He duplicitously blamed Edmund for Lothparck's death, and led the Danes back to Edmund. But the Danes knew Bern was a traitor - and chased him out of the scene, his arms flailing wildly - much to the amusement of the audience! The second was when Boudicca came thundering in on her horse-drawn chariot - a spectacular scene and a testament to the effort put into many of the early historical pageants. 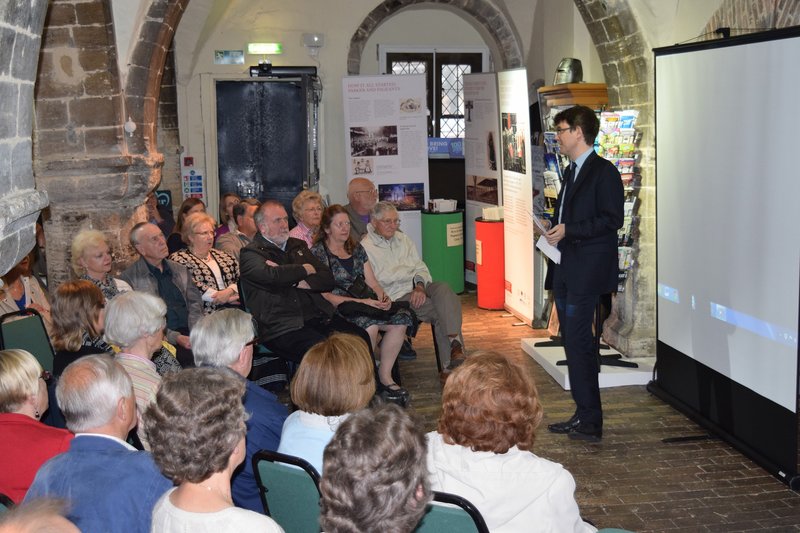 Paul talks to the audience to open the evening. Photo by kind permission of Alan Baxter.

Next up was the 1959 pageant. Paul gave a brief talk about how the movement had changed over the previous 50 years, and described the 1959 pageant itself - one of the 'classiest' pageants of the postwar period. We then showed a 50 minute film. The first half of the film was particularly interesting to the audience, since it showed a glimpse of what Bury St Edmunds was like in the 1950s - in colour and with sound! We were taken back to the bustling market days, and also shown the new industries and estates growing up around the town. Notable architecture, such as the Cathedral and Abbey Gate, were described, and the narrator listed some of the important people who had been born or lived or visited Bury St Edmunds. We then showed the full recording of the 1959 Magna Carta Pageant - the first public showing of this film (we believe!). The audience really enjoyed being taken back to this momentous occasion, especially those that had actually taken performing parts. There were plenty moments of humour - not least when a lazy monk was tipped into the river, or a thief was pelted with rotten eggs and fruit!

Tom the projectionist, at the back, sets up as the room begins to fill. Photo by kind permission of Alan Baxter.

To round off the evening we showed a few clips from the Edmund of Anglia pageant of 1970. I introduced the film by telling the audience about how Bury St Edmunds had changed since its last pageant in 1959, and about how there had even been challenges to the idea of celebrating the Year of Edmund - much to the surprise (and even disgust!) of the audience. Even though this last pageant was meant to have been a lot more serious, concerned as it was with the life and death of the martyr Edmund, the audience couldn't help but find amusement in the over-the-top theatrics and gruesome stage props (such as an arrow-filled head of Edmund!). After a few kind words from Margaret Charlesworth, who organised the reunion the previous week, we wrapped things up. The audience had a few minutes to look around the exhibition, before we all left. A great evening! 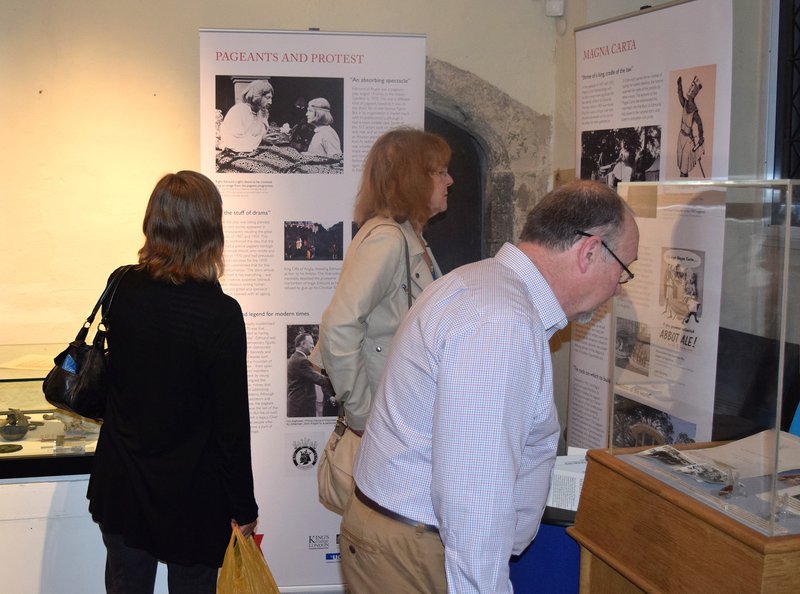 Some of the audience have a look around our free exhibition. Photo by kind permission of Alan Baxter.