Cover of the Book of the Words of Helmsley Festival Play, by Herbert Read

The setting for the Helmsley Festival Play of 1951 was its own castle, which in the twelfth century had belonged to the play's subject, Sir Walter Espec, an influential baron of the period and one of the key figures in the Battle of the Standard of 1138.  Set above the town on the edge of the North York Moors, many of the castle's ruins are still preserved, despite its partial destruction during the Civil War to prevent it from being used again defensively.  It was an ideal backdrop for the play, written by Herbert Read (later Sir Herbert Read), which formed part of the town's Festival Of Britain celebrations.  This was not Helmsley's first pageant: at the end of the nineteenth century its vicar Charles Gray had organised pageants in two successive years, 1897 and 1898, on the same theme of the life of Walter Espec.

The action of the 1951 Festival Play is set between 1122 and 1151, and tells the story of Sir Walter and the founding of the Cistercian abbey of Rievaulx, whose ruins stand two miles outside Helmsley.  Herbert Read's script was based closely upon historical documents that made reference to the legend of the death of Sir Walter Espec's son, his namesake.  The play begins as a group of hunters are preparing to leave in the morning, led by the young Walter.  His mother, the Lady Adeline, recounts a dream in which her son is killed, having fallen off his horse, and she begs him not to ride with the hunters that day.  The young man shrugs away her concerns, and, inevitably, meets his death.  Upon hearing the news, as his only son's body is brought back to the castle by the hunters accompanied by monks, the sorrowful Sir Walter vows to build 'A holy house upon that spot / Where Walter fell.'  The hunt had take place over the countryside of Scawton Moor, Sproxton, Hovingham, and Terrington, and the young Walter had finally fallen at Kirkham, so his father, true to his word, has a priory built upon the site. 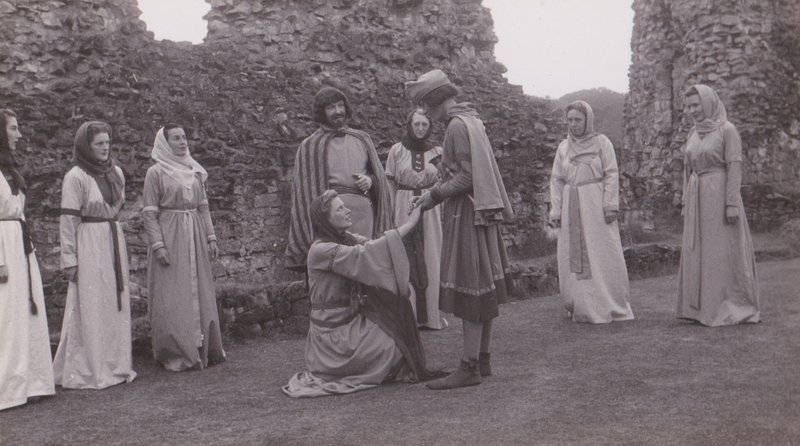 The play then moves forward ten years to a tournament scene in which Walter is approached by five Cistercian monks, who ask him for land to build an abbey at the site that would become known as Rievaulx.  Walter agrees, welcoming them warmly, and the monks set out to seek the help of craftsmen to accomplish their task.  Sir Walter's military deeds are then addressed: the next scene is based upon his actions in rallying men from the area to fight against the Scots, who had reached Northallerton.  The scene is again set at the castle, where Sir Walter addresses the assembled soldiers with a rousing speech before they leave to fight the Battle of the Standard (22 August 1138: the Scottish forces were successfully repelled and eventually driven back as far as Carlisle).  News of the victory reaches Helmsley, at which point its people make plans for a feast to celebrate the success of Sir Walter and his men.  They sing a song of victory, telling of their plans to 'Kill twenty cocks and roast an ox / And bake an apple-pasty; / We'll drink a pail of harvest ale / And dance till we are thirsty.'  A stage direction suggests 'Further fun ad lib.', which we can only assume was followed thoroughly.  Finally, the play tells the story of Walter's old age, when after the death of his wife he joins his friend Ailred at Rievaulx Abbey and is received into the community there.  His armour, the symbol of his military leadership, is removed and he dons the white habit of a Cistercian monk.  Walter's castle and lands are inherited by his nephew.  The play finishes with the narrator reminding the audience that '…These stones / That frame our feeble words / Were witness once of valorous deeds / Whose fame in mime and song / We have this day enacted.' 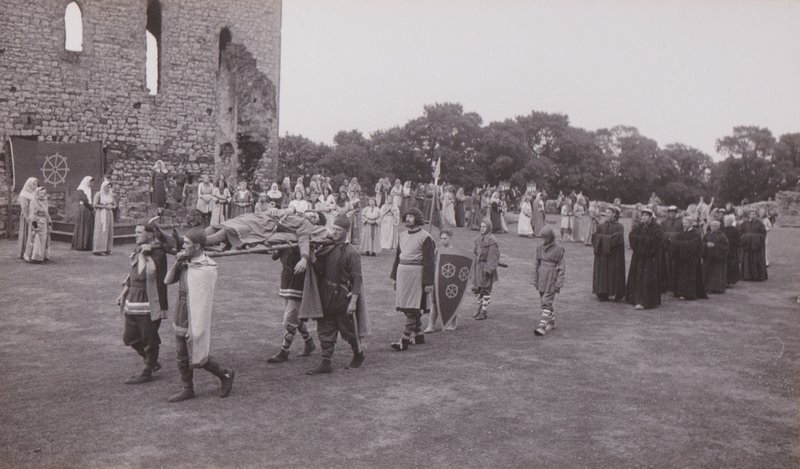 Young Walter's body is borne back on a stretcher, accompanied by monks

The Festival Play was well received by the press, despite having begun on a damp note: the dress rehearsal was cut short due to downpours.  In a nod perhaps to local rivalries, the Evening Post’s correspondent describes ‘colourful and dramatic scenes so vividly wrought by the townsfolk against a more wonderful ‘backcloth’ than even York enjoyed for the Mystery Plays’, despite York having staged its own historical pageant that year at the ruined Abbey of St. Mary in the Museum Gardens.  The report continues: ‘In the centre of the lawns the grey Norman keep towered 150 ft. aloft, and right and left spread out the green, saucer-like hollow of the countryside in which Helmsley nestles.’   The Yorkshire Post goes further in its report of the dress rehearsal, noting that ‘Against the castle ruins the coloured costumes of the players -archers and soldiers, hunters on horseback, monks, peasants and servants- provide a gay and charming spectacle.’

The souvenir photograph album produced by Massers' Studio of Malton

The writer and poet Herbert Read had grown up in the Helmsley area (Muscoates Grange, Kirkbymoorside) as a child and had returned as a successful writer to live there with his wife Margaret many years later, moving back to Yorkshire several years before the Festival Play was performed.  Recalling his happy childhood there, described in his book The Innocent Eye (1933), he seized readily upon the opportunity to contribute towards the production of the Festival Play as its writer, and both he and Margaret were deeply involved with the planning of the event.  Read asked his friend, the actor Robert Speaight, to direct the production and to narrate Read's script.  The pairing of Read as writer and Speaight as narrator worked very well: the Evening Post reported that Speaight, positioned in a niche in the masonry, had ‘stirringly delivered Dr. Read’s pithy lines’, and the Yorkshire Post described Read telling ‘his story, sometimes movingly and always in splendid language, in the form of a long narration which is beautifully spoken by Robert Speaight.’

The players in the pageant were local residents.  The part of Ailred, the first abbot of Rievaulx, was played by Ernest Williams, who provided continuity from the 1897 pageant, having taken the part of young Walter Espec when he was 16 years old.  The young man who played this role in the 1951 play was Anthony Barker, the son of the Master of the Horse, C.A. (Kit) Barker.  Kit Barker's stables provided the horses for the production – mostly ridden, as Anthony recalled, by local farmers – as well as the greyhounds used as the dogs in the play's hunting scene.  In addition to the part of Walter Espec, Anthony also took on an incognito role as one of the knights.  For this part he was obliged to do a jousting scene with his father, which he enjoyed very much: he recalled that the lances were rather sharp and that they had no dividing wall between them; they had to make three passes past each other, which happily went successfully and without incident.

Many residents of Helmsley were involved in the design and making of the costumes for the Festival Play. Mrs. Sally Tetley, who played Lady Adeline, recalled that mill owners from Leeds, Sheffield and elsewhere, whose daughters were being educated in Helmsley at Queen Mary's School, Duncombe Park, donated cloth for the costumes.  These were then made throughout the winter of 1950-51: there were many active sewing machines and needles during those months, and a local newspaper ran a feature on a Helmsley resident who had volunteered to make hundreds of felt shoes for the cast, having never before made a shoe in her life.  Special padded shoes had also had to be made by the Barkers for the horses, in order to protect the grass around the castle during rehearsals.

The music for the play was composed by Dom Austin Rennick OSB, a monk of nearby Ampleforth Abbey, who also helped in the translation of some of the manuscripts that Read consulted during the preparation of the script (including Ailred's tract Patrologia Latina).  Read's songs drew heavily upon local themes and traditional occupations, including a version of the Lyke Wake Dirge, describing the journey of the soul, and an adaptation of a fifteenth-century verse description of blacksmiths.  He also included the first two hymns of St. Godric, a friend of abbot Ailred, in adapted Middle English.  Sally Tetley remarked that her husband David Tetley, who played the character of Godric, had kept a little tuning fork in the pocket of his robe to assist him in this singing role:

With the(e) in Godes riche.

Bring me to winne

The Helmsley Festival Play of 1951 brought together the people of the town, including the three main religious communities (Church of England, Catholic and Methodist), in joyful recognition of the fact that the Second World War was over and there was much for the town to celebrate.  Having seen the play performed as a child, the historian, writer and poet Lucy Beckett notes that a significant proportion of the audience and performers had lived through both world wars, and the Festival of Britain provided them with an means of demonstrating their pride and interest in the past and the present, whilst looking forward to a more positive future.  In this Helmsley was not alone: many small towns throughout Britain were putting on celebratory events, particularly in 1951 and, for the Jubilee, in 1952.  At the same time, the play brought to life a period that connected Helmsley's residents to a very localised history, that of their own Castle and nearby Rievaulx Abbey.

The Historical Pageants project would like to thank Sally Tetley, Lucy Beckett and Anthony Barker for sharing their recollections of the Helmsley Festival Play with us.