Where is the database?

Our database of over 550 pageants can be accessed by clicking on the grey "pageants database" tab at the top of the screen. This is the URL: https://histpag.dighum.kcl.ac.uk/pageants/

What is a historical pageant?

Historical pageants were usually large, sometimes huge, events where hundreds, even thousands, of people came together to enact the history of a village, town, city, organization – you name it, there was probably a pageant featuring it! The first modern pageant was held in the small Dorset town of Sherborne in June 1905 and featured 900 performers, at a time when the town’s population was only 6000. It  attracted more than thirty thousand spectators who witnessed scenes depicting the history of the town from the arrival of St Eadhelm, the first Bishop of Sherborne, in 705 through to Sir Walter Ralegh’s visit to the town in 1593. Pageants quickly spread across the country, and many thousands were held. The number of pageants gradually declined after the Second World War, though some small ones continue to be held each summer.

Pageants offer a fascinating window into how people thought about, wrote about, and engaged with the past. Their study can show how places and people came together as communities to put on huge, and often very expensive, spectacles. In an era before widespread access to films and, later, television, pageants were often the largest and brightest thing to happen in a town and attracted thousands of spectators including members of the Royal family (queen Victoria’s daughter Princess Louise was an early enthusiast). Many prominent people featured in pageants. They included Kenneth Williams, who acted in the 1951 Cardiff Pageant; Siegfried Sassoon, Dean Inge, Henry Newbolt, and Rex Whistler, all of whom performed in the George Herbert Tercentenary Pageant in 1933; the historian G.M. Trevelyan, who wrote and acted in the Berkhamsted Pageant; T.S. Eliot, who wrote his own historical pageant, The Rock (1934); E.M. Forster and Ralph Vaughan Williams, who wrote and composed music for the 1934 Abinger Pageant; and A.A. Milne and his son Christopher Robin Milne, who performed a scene with animals from Winnie the Pooh in the 1928 Ashdown Forest Pageant.

Many organisations – from church groups to the Women’s Institute to the Communist Party and even the Friends of Fergusson Tractors – held pageants to promote their institution, and to celebrate their unique and sometimes eccentric histories. For instance, who would have thought that a pageant would have been held to commemorate the centenary of the death of the inventor of tarmac!

The traces left by these pageants, many of which have been captured by this project and on this website,  thus provide extremely valuable and interesting insights into the social histories of communities and how they came together to remember and celebrate their past.

What is our project?

The Redress of the Past is a collaborative research project drawing on the expertise of scholars from the University of Edinburgh, the University of Glasgow, UCL Institute of Education, and King’s College London. It has been running since November 2013. Since then, members of the  project team have travelled the country collecting the information on pageants that is recorded in our database http://www.historicalpageants.ac.uk/pageants/

The database contains information on over five hundred pageants that were performed in England, Scotland, and Wales during the course of the twentieth century. We have also put on exhibitions in Bury St Edmunds, Carlisle and Scarborough, as well as interviewing dozens of people who took part in pageants.

Our project secured a grant (AH/K003887/1) from the Arts and Humanities Research Council, a government-sponsored public body that distributes funds in support of research into the arts and humanities carried out at various universities and institutions across the country.

What’s in the Database?

The database contains entries of over 550 pageants (and growing). These list a wealth of information about individual historical pageants, sometimes in great detail. Insofar as records allow (and little trace remains of many pageants), we have sought to record details of the times and places of performances, those involved in organising and staging them, and how many people attended. For each pageant, we have also sought to record, again as fully as possible, whether the pageant made or lost money, details of the music that was played and who composed it, and synopses of the individual episodes which featured. In addition, for each pageant record we provide lists of the names of the notable historical figures that featured in the action. Last but certainly not least, we have prepared a detailed summary essay explaining each pageant and placing it in its wider historical context.

We have information on all – or nearly all – of the largest pageants performed in twentieth-century Britain as well as a broadly representative sample of smaller pageants.

How do I search the database?

The database is free and open to all users. There are several ways in which you can search the database. You can click on one of the pins in the map (clicking See More will bring up the entry) 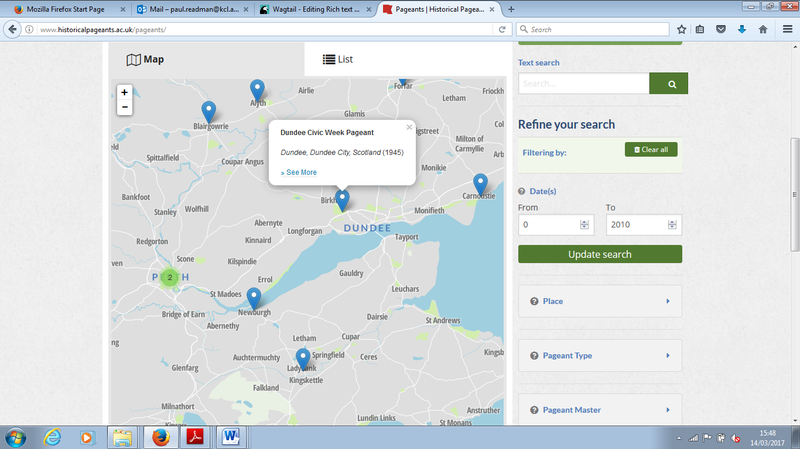 You can also type a keyword into the search bar at the right of the screen. For instance, here I have typed in the word ‘dinosaur’, which brings up three hits for pageant entries which feature the word ‘dinosaur’ (the Pageant of Birmingham featured two thirty-foot fire- breathing ones!) 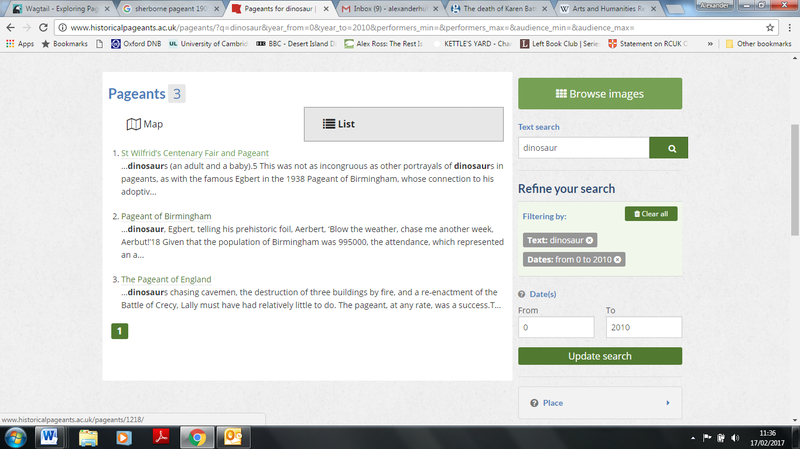 You can also search the database by Date, Place, Pageant Type, the names of Pageant Masters, Author, Composer, historical figure, or by the numbers of Performers and the size of Audiences. 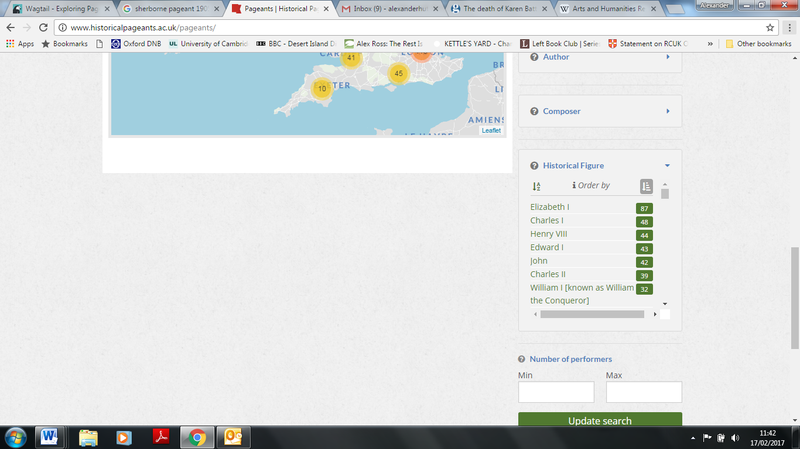 We hope that you enjoy using this database to explore pageants and local history. If you have any suggestions or questions, please contact us at historicalpageants@kcl.ac.uk

How do I cite the database?

If you are citing material from the database in published work, please use the following conventions:

How to cite the database as a whole

How to cite an individual entry

You should include the title of the individual pageant, as cited at the top of the entry, as well as the link to that specific pageant. Here are two examples:

Angela Bartie, Linda Fleming, Mark Freeman, Tom Hulme, Alex Hutton and Paul Readman, ‘The pageant of Ercildoune’, The Redress of the Past, http://www.historicalpageants.ac.uk/pageants/1063/

Angela Bartie, Linda Fleming, Mark Freeman, Tom Hulme, Alex Hutton and Paul Readman, ‘The pageant of Buxton in Light and Sound’, The Redress of the Past, http://www.historicalpageants.ac.uk/pageants/1019/