The Leicester Pageant of June 1932

*Guest post by Dr. Siobhan Begley - author of The Story of Leicester*

The early 1930s is a time usually associated with economic depression and austerity. However, in June 1932, the East Midlands city of Leicester chose to stage an ambitious civic pageant.  This was a ten day extravaganza of massed events and historical enactments organised by the Borough Council in partnership with the voluntary associations of the city and the county of Leicestershire. More than 4000 people from city and county took part in the Pageant and a special ampitheatre was erected in Leicester’s Abbey Park to house the performances. Every night the pageant players performed to full and enthusiastic audiences and each day crowds of local people and visitors attended the additional events which included processions, dance and sports displays, interdenominational religious services and a mock Elizabethan market. 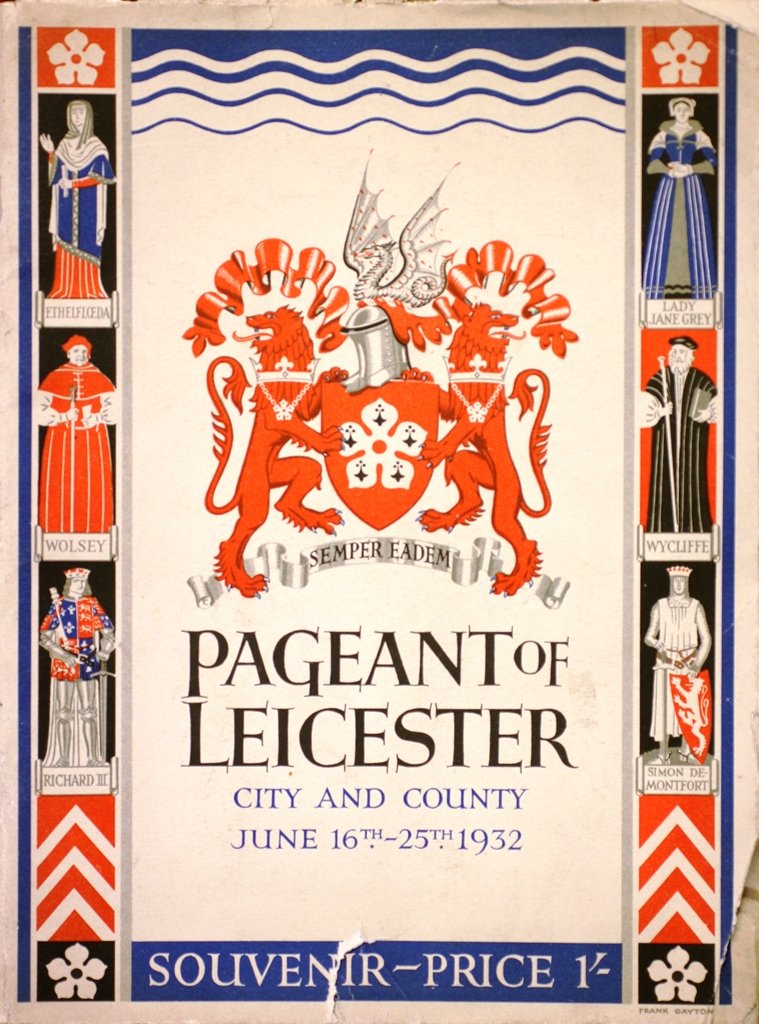 Leicester, of course, had not been unaffected by the depression and there was poverty in the city but in comparison to many other industrial cities Leicester had escaped very lightly on account of the diversity of the local economy. This boasted three staple industries, knitwear, boots and shoes and engineering as well as wide range of smaller trades.  Basking in this relative prosperity, the civic authorities saw an opportunity to raise the profile of the city with a pageant that would highlight Leicester civic pride and showcase local business.  Here was an opportunity for the civic authorities to play down class and other internal social differences and represent Leicester to itself and to the outside world as a prosperous, unified modern city while using a pageant of local history to add both glamour and gravitas to the occasion.

A public meeting was held at the Town Hall in December 1931 to launch the project.  The Leicester Evening Mail described this as ‘a meeting of the citizens of Leicester attended by representatives of almost every social, industrial and religious movement in the city and the county’. By calling this mass meeting of clubs, societies and other voluntary associations the pageant organisers were able to tap into a wide range of social networks and recruit thousands of helpers and performers.  A further achievement was the appointment of the celebrated pageant master, Frank Lascelles, to direct the spectacle. Lascelles had directed many highly successful pageants in English cities and towns including London, Oxford, Bristol and Bath and his grand pageants overseas included events in Calcutta, Cape Town and Quebec. 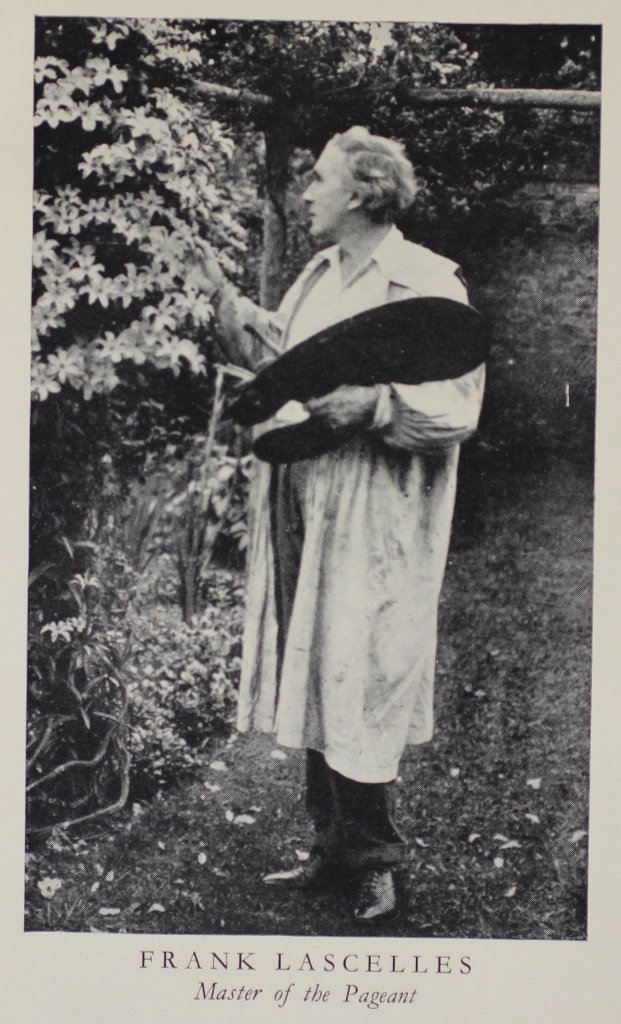 The pageant script consisted of seven episodes written by local writers and it traced the story of Leicester through from the period of the Romans to the Victorian industrial town. Organisations were put together in groups to work on different parts of the performance and this resulted in some varied combinations of people.  In April 1932 it was reported that rehearsals for Episode One were in progress and that groups involved included the Catholic parishes of Leicester, the British United (shoe company) Drama League, the Glen Parva Army Barracks and the Leicester Women’s Athletic Club.  This group were coordinated by a committee headed by the headmistress of Leicester Sacred Heart Catholic School.

The level of commitment required by the pageant actors was demanding. Not only were there regular rehearsals but those taking part had to make their own costumes to approved designs.  At the same time momentum was kept up in the town by a range of supplementary activities these included a series of public lectures and a competition to find a special pageant song.  The winning entry of this competition was later taught to schoolchildren throughout the city.  Local shops meanwhile were also invited to prepare special displays for pageant week.  Throughout the preparation period the local press played a central role maintaining enthusiasm with constant discussion and updates on pageant news. 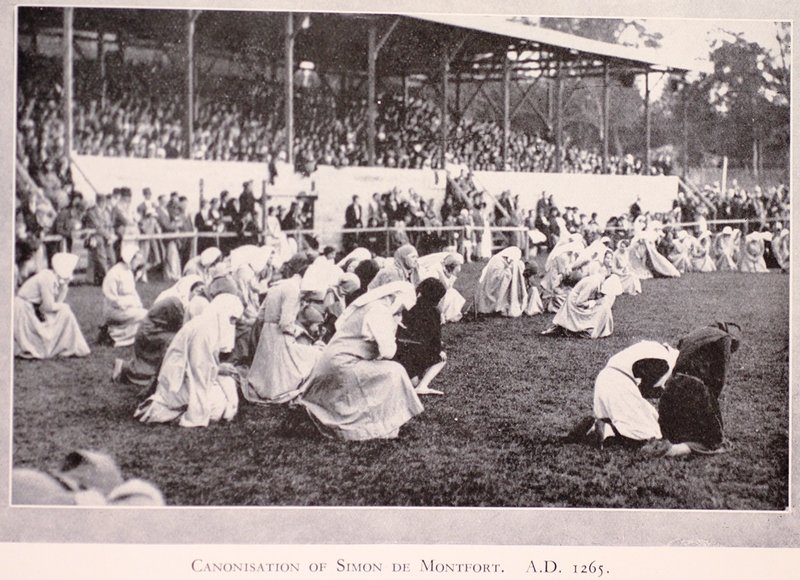 When pageant week came in June it was not an anti climax.   There were performances every evening and on several afternoons and from the outset these were full to capacity.  Newspaper coverage was extensive with many photographs not only of the performers but also of the audiences; no doubt this boosted sales with local people buying papers in hopes of seeing pictures of friends and family.   The celebrations were divided into a series of themed days, including, Day of Industry, Civic Day, County Day, Day of the British Empire and Children’s Day and some of the most important attractions aside from the pageant itself were an industrial exhibition, a trade procession and a civic procession.

The industrial exhibition, held at Leicester’s De Montfort Hall, was opened on the Day of Industry by Viscountess Snowdon, the wife of Philip Snowdon the wife of the previous Labour Chancellor.  There had been hopes of getting Lloyd George to fulfill this role but this plan failed to work out. The grand opening however was a success and the exhibition was comprehensive with exhibits from many local firms.  On the same day, the trade procession impressed the crowds as more than ninety firms from the town and county took part as well as trade unions and trade associations.  National leaders of workers’ organizations, including the TUC, were invited to both to this event and a civic dinner, a symbolic demonstration of class cooperation. 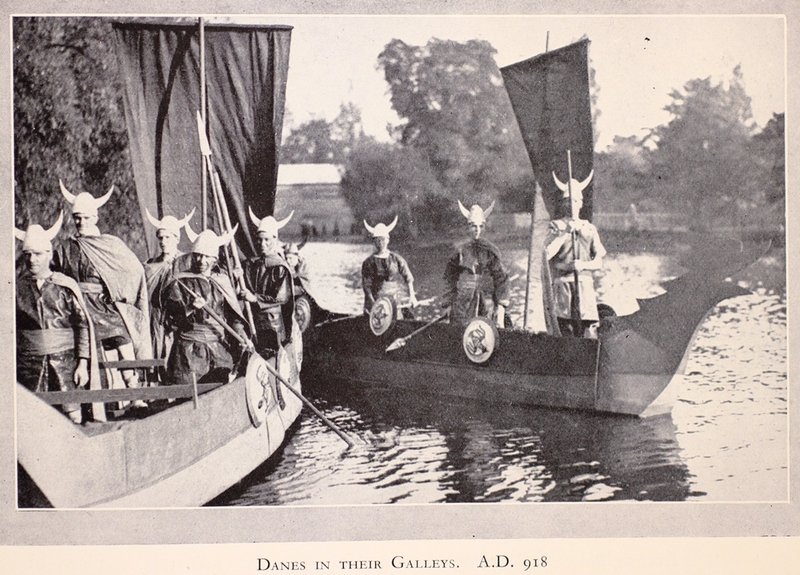 Civic Day was also a highly elaborate occasion.  The focus was the opening of a new modern thoroughfare in the city-Charles Street.  In honour of this the Lord Mayor of London had been invited to cut the cord and process through the town accompanied by the Leicester civic leaders and thirteen mayors of other provincial towns.  All mayors wore ceremonial dress, the Lord Mayor of London rode in his ceremonial coach and following behind in a column nearly half a mile long processed the entire cast of pageant performers in full costume.   A half day’s holiday was declared so that the townspeople could attend the event and the streets were densely packed with spectators. 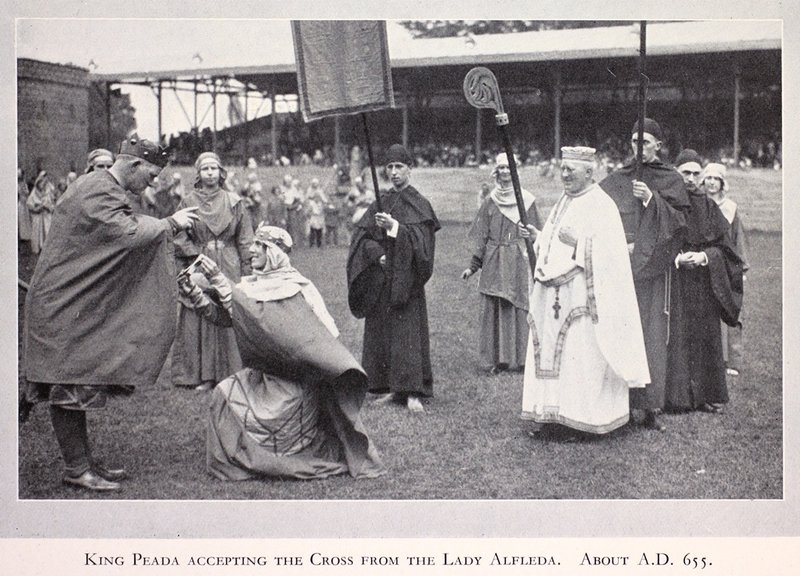 What was remarkable about the Leicester Pageant was not just the number and variety of people involved but also the level of commitment that they showed, going to meetings, forming committees and attending rehearsals for six months.  It was a genuine display of mass participation that was supported by the associational life of the town. Local clubs, societies, charities and church congregations brought people together on a regular basis and had made this mass effort possible.  The pageant had been intended to celebrate local prosperity and raise the profile of the city and in 1936 Leicester was recognized by the League of Nations as the second wealthiest city in Europe.