Author Noel Streatfeild (1895–1986) had a remarkable literary career, which included publication of many children’s books themed around different occupations. Streatfeild had worked as an actress before turning to writing, and she drew upon her experiences on stage in her works. She is best known for her first novel Ballet Shoes (1936), which portrayed Pauline, Petrova and Posy Fossil pursuing careers in acting, aviation and ballet. Streatfeild’s novels frequently feature characters who are passionate about performing on stage. These include children who act or dance in historical pageants. The Andrews children in Party Frock (1946) organise their own pageant to perform in their village to raise money for the Air Force Benevolent Fund, and to provide their cousin Selina with an occasion to wear her new frock. A pageant also features in Streatfeild’s later novel Gemma (1968). In this case, the show is put on so a school can contribute to raising money for the hospital to buy a kidney machine.

The two protagonists of Party Frock and Gemma – Selina Cole and Gemma Bow, respectively – are both sent to live with aunts and uncles while their parents are away. The circumstances for both girls are different: Selina’s parents are in a Prisoner of War camp in Hong Kong, and Gemma’s mother is working on a new film. However, the two girls share similarities in that they both feel insecure when surrounded by talented cousins. Selina is also behind with her schoolwork and does not believe she has any skills. In contrast, Gemma has enjoyed a successful career as a child actress, but after going through a period without any work, she is anxious about what her schoolfellows will say about her, so she changes her surname to conceal her identity.

Pageants give both girls a purpose. Streatfeild was inspired to write Party Frock after her niece Nicolette received a beautiful frock, but the war meant that there were few appropriate occasions for party clothes, and as a growing girl, she feared that she would never get the chance to wear her new dress. Selina is in Nicolette’s position when she receives a parcel from her godmother in America. After deciding that it will be impossible for the family to host a party or dance, the Andrews children decide to put on a historical pageant with Selina’s role being that of the girl who dreams scenes from previous centuries. In addition to appearing in the pageant, Selina is also responsible for several tasks behind the scenes, including helping characters to learn the parts, making sure children have the right costumes, and getting actors ready for their entrances. This enables Selina to have confidence because she realises that she has valuable skills in stage management. When Gemma discovers her school is putting on a pageant, she is determined to get into the drama group and secure one of the main parts, despite being one of the younger pupils. She impresses at an audition and is given the main part of the girl who links the scenes of the pageant together. This gives Gemma an opportunity to showcase her talent for acting and potentially re-establish her career. 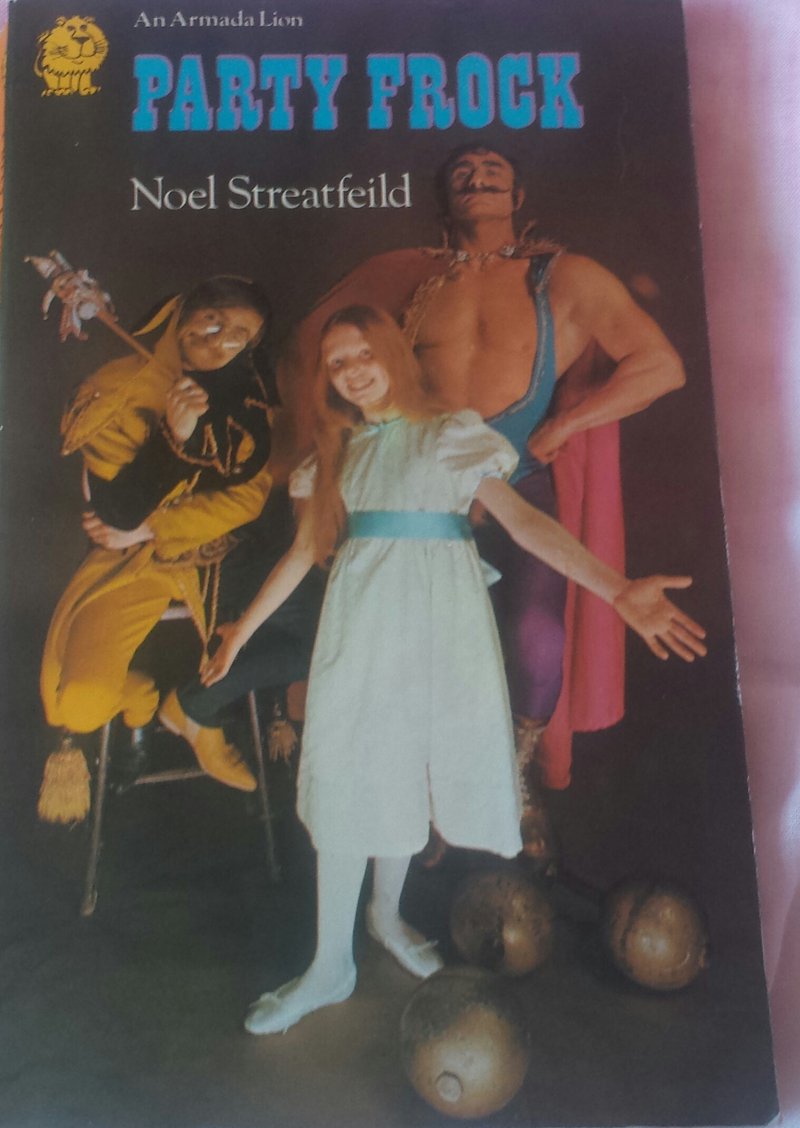 Party Frock is a compelling novel which illustrates how a community comes together to successfully produce an entertaining pageant at the end of the Second World War, despite the limitations due to rationing. Colonel Day gives them permission to stage the pageant on the lower lawn of his house – the Abbey – before it passes over to new owners. Four of the Andrews children (John, Sally, Christopher and Phoebe) all agree to write their own scenes, and the youngest two brothers, Augustus and Benjamin, are also given parts. They receive direction from the Days’ nephew Philip who is experienced in producing plays. He helps them improve their scenes and writes two more to document seven hundred years of history in the village. The scenes are linked together by dancers from the Linkwell Ballet School who represent ghosts from different periods.

Selina appears on stage in her frock, holding her book which represents the stories that are about to be told in the pageant.

There are three main parts in John’s scene. John acts the part of the boy who is educated at monastery. The Abbot is played by Mr Laws, the village vicar, who is very unpredictable. In rehearsals, Selina struggles to get him to focus on learning his lines and come on stage when he is supposed to do so. Mr Andrews plays the part of John’s father, a knight, who comes to take John away from the Abbey so he can become his Esquire. The scene features twenty-five knights and forty-two monks.

Phoebe’s Scene: The May Queen

Phoebe is the gifted writer in the family and longs to demonstrate her skills in writing Elizabethan poetry whilst playing Anne Boleyn. She changes her mind though when Philip warns her that her scene might not be historically accurate as it is unlikely that Anne Boleyn would have spoken in rhyme. Phoebe compromises and agrees to have a sixteenth-century scene with her being crowned as the village May Queen to make it seem more realistic. The May Day festival features conjurors, jugglers and maypole dancers. Her father’s assistant at the surgery, Miss Lipscombe, relishes the opportunity to play a fearsome schoolmistress who supervises the children during the May Day celebrations.

Many of Streatfeild’s fictional families feature a promising dancer, and in the Andrews family, it is the younger twin, Sally, who has a passion for ballet. Mrs Day plays the part of Queen Elizabeth observing a masque. Dancers from the village and the Linkwell Ballet School are used for Sally’s scene. Sally plays the part of the girl carried off into fairyland and has a solo at the end the celebrate her freedom. She impresses in her performance and is rewarded with a place at the Ballet School.

Sally’s twin, Christopher, is unsure of what he wants to achieve in his scene, but he knows he would like to be funny. With Philip’s assistance, they decide to have a St George’s Day procession featuring seven mummers, which includes Christopher playing the part of Beelzebub, also known as The Fool. Miss Lipscombe appears on stage again, this time as a woman accused of witchcraft, and is chased by a rabble of people who throw objects at her.

This is an extra scene produced by Philip to increase the pageant’s length and bring it up to the present day. It features the residents in the village celebrating after the announcement of the relief of Mafeking in 1900. Mr Bins, the postman, plays the town crier, which is fitting, as he was the person to deliver the frock to Selina which enabled the pageant to happen. The Andrews’ housekeeper, Mrs Miggs, and one of the Days’ servants, Partridge, take part in a barn dance to celebrate.

It is 1939 and the audience hears sirens. Children come on stage dressed as evacuees and jeeps appear to show that the American soldiers have arrived. Audience members can relate to this scene, as many are able to remember looking after evacuee children. Colonel Day appears on stage so that he can say a final goodbye to the Abbey.

Selina appears again to close the pageant. Her speech contains poignant words about the last seven hundred years of history – ‘Years of change. Years of gladness. Years of suffering. One thing has remained unchanged. The English heart. The English love of the old customs, and the old ways.’ She then announces that the American soldiers have bought the Abbey to use as a hotel for when young American people come to stay, but that the Days will continue to live in a few rooms and act as host and hostess. Thus, the family will remain in their home in years to come. 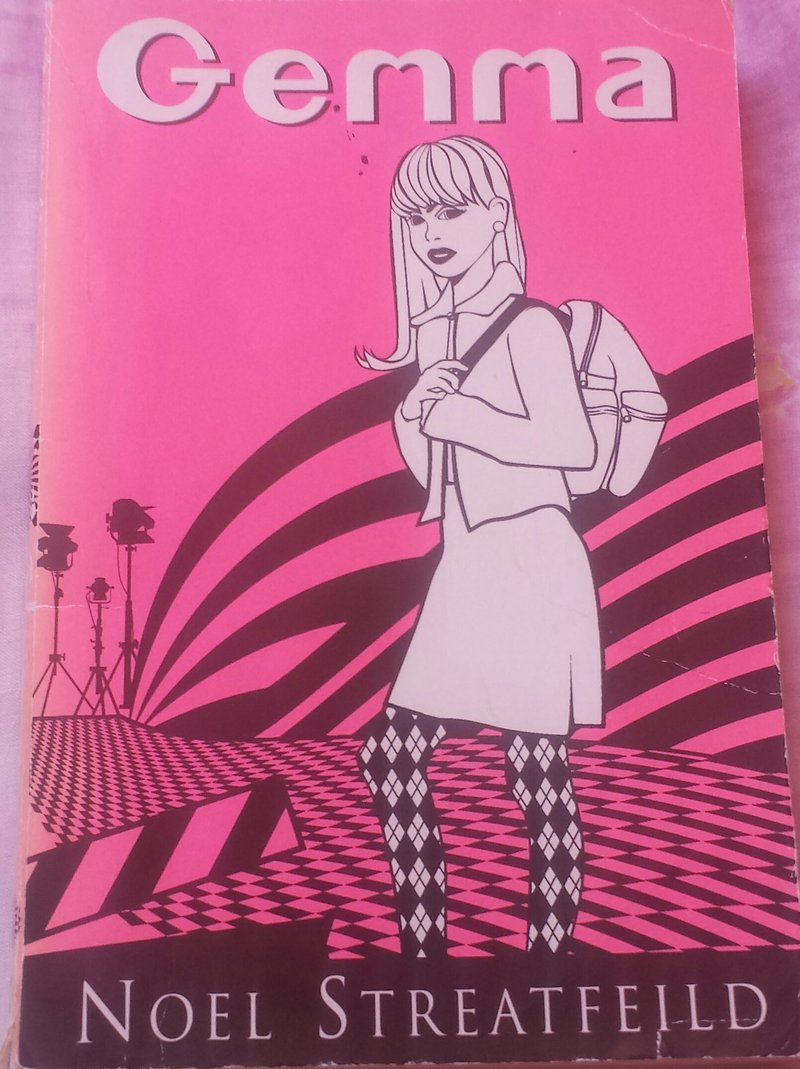 Photograph of the 1999 Collins edition of Gemma. Cover illustration by Stuart Patterson.

Gemma differs from Party Frock because it does not feature extensive detail about the pageant, and the children are not involved in producing or writing the scenes as they are all written by the history teacher. However, the pageant is significant in the novel because it empowers Gemma. The pageant features a boy and girl who link the scenes together, with Gemma playing the girl. Sammy Birtwistle is given the part of the boy, and Gemma frequently has to remind him about what he is supposed to do on stage. Gemma’s cousins also participate in the pageant. Lydia is part of a dancing school, and she and her fellow pupils dance as fairies who take the boy and girl into fairyland. Ann is also in the school choir. The descriptions of the pageant are brief, and readers are not given insight into each individual scene. One that is revealed, however, is the one in which Gemma’s class features. The children are to act the parts of Victorian schoolchildren at a charity school – originally known as ‘The Red Cloak School’ because the girls wore red cloaks and the boys red scarves. The Robinson children’s grandmother is jealous of Gemma’s acting ability and is reluctant to praise her, but she is able to use it to her advantage. She asks Gemma to organise a group performance at the hospital with her grandchildren so they can showcase their skills. Gemma agrees and her group – ‘Gemma and Sisters’ – perform a routine featuring Ann’s singing, Lydia’s dancing and Gemma’s banjo-playing (another skill she acquired since living with the Robinson family). Streatfeild’s first Gemma novel is followed by three sequels: Gemma and Sisters (1968), Gemma Alone (1969), and Good-bye Gemma (1969).

Rebecca Morris is a PhD student at the University of Hull. Her thesis focuses on girl heroes in children's books from the nineteenth century to the present day. She specialises in children's literature and also has research interests in young adult fiction, the Victorian era and early twentieth century novels.