Pooh at the Pageant. The Ashdown Forest Pageant (1929)

It was in September, 1928, that Mrs Olaf Hambro of Kidbrooke Park…broke to me the news that the Village Hall was badly in need of £1,500 for building its new wing, and that she and Miss Needham thought that the only way of raising money would be to have a pageant – a pageant of Ashdown Forest. Wouldn’t it be fun…This was a trifle startling, and I said so, and I did my best to be cautious about the whole project. But that was quite useless. Mrs Olaf was full of enthusiasm – pageants were the only things which always made money…we’d get thousands of people to come and see it and make a whole heap of money and charge enormous prices, for we’d do it awfully well. Oh yes, it might rain, of course, but we’d have to chance that, and anyway we could insure against it.[1]

Major-General Edward Gleichen’s recollection of the pageant provides key insight into how pageants got off the ground, and the startling unawareness of the harsh realities of pageant-making, displayed by most of the people who sought to put them on. Gleichen, an old soldier, geographer and diplomat, who had been in the unsuccessful expedition to relive General Gordon at Khartoum in 1885,[2] had always been interested in the history of Ashdown Forest where he lived, and duly set to work writing the pageant, attempting to distil interesting vignettes and episodes from ‘the everlasting squabbles that went on between the foresters, the ironmasters, the tenants, the Crown and the local property owners’, interesting to legal historians perhaps, though ‘there was not much of human, and still less of dramatic, interest for my purpose.’[3]

Whilst Gleichen’s reticence was a little overdone – he was a prolific author and Times columnist – his decision to write a pageant from scratch (and quite a lively and effective one at that) is a testament to the indomitable, can-do attitude of many people of his particular generation and social class. To help, the company employed the services of the rising-star of pageantry Gwen Lally, fresh from her success at Westcroft Park, Surrey (1928). Kidbrooke Park was to be Lally’s first significant pageant, moving away from the Women’s Institute village pageant form towards ever-more lavish and grand-scale performances.[4]

Like many successful inter-war pageants, Ashdown Forest channelled a sense of old or deep England, largely unchanged over many centuries and unspoiled by modernity, with ease of access by rail or motor car from London. Paradoxically, many of these pageants were successful precisely because they were easily accessible from by train or car for visitors from London seeking a brief escape from the ‘Great Wen’. Southern Rail (in those halcyon days when it actually provided functioning trains) offered return tickets at single fares to nearby East Grinstead station throughout the week. Ashdown Forest was a well-known tourist spot. As the East Grinstead Courier remarked: ‘Londoner who had often visited ‘had never before realised how sacred and full of historical romance was the ground they had so often traversed on foot or in their motor cars’.[5] Thus, Ashdown Forest, whose edges were being heavily colonised by housing estates for London commuters, represented a tangible link with the past and with nature which was accessible for a daytrip from London. 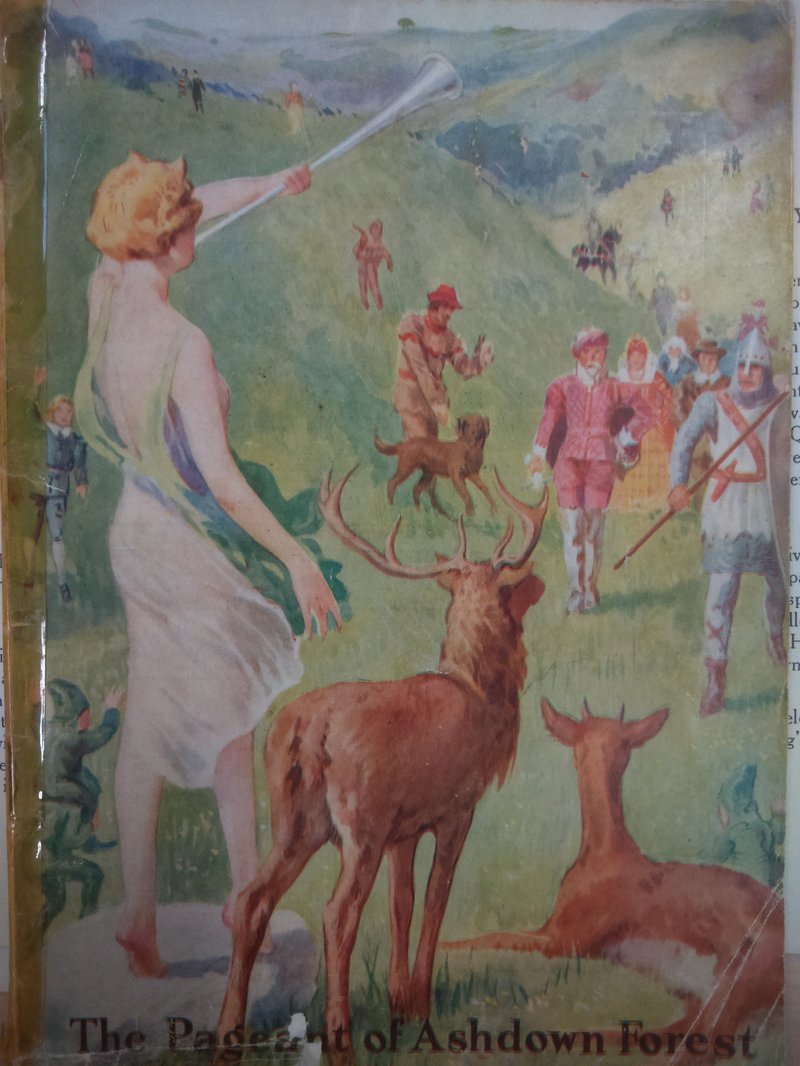 Above: The cover to the Pageant of Ashdown Forest Programme

Despite a heatwave causing a number of visitors to collapse, and a mini tornado on the last evening which tore down a canvas roof on the grandstand, injuring a number of spectators, the pageant was a great success, making over £3000 in profit. Rudyard Kipling, who had written parts of the Pageant of Empire (1924) helped Gleichen with the script and was a prominent supporter of the pageant. The poet Vita Sackville-West, whose ancestors were memorably recorded in a number of the scenes, wrote the prologue. The Pageant was opened by the Duchess of Richmond and closed by the Duchess of York.

Aside from the attendance of royalty, the pageant hosted another celebrity, only nine years old. Christopher Robin Milne, who had been made famous by his father’s book The House at Pooh Corner the previous year, featured briefly in the final scene accompanied by Pooh, Piglet and the other toys. The scene is particularly poignant, coming directly after a scene recreating the First World War artillery camp in the Forest, featuring many veterans.

The Milnes had moved to Cotchford Farm on the edge of Ashdown Forest in 1925, and the forest itself provided the backdrop for the books (masquerading the Hundred Acre Wood).[6] Christopher Milne recalled the pageant in his autobiography The Enchanted Places (1976):

The theme was “Ashdown Forest through the Centuries” – or something similar. The setting was a circular, saucer-like field lying within a crescent of trees. In the middle of the crescent was a gap where a track, coming from behind the trees on the right, swung out into the open, crossed a broad, flat wooden bridge, and so entered the stage. And down the track and over the bridge came Boadicea and the ancient Britons, came Henry VIII and his courtiers…Down the track galloped the Excise Men, the hooves of their horses echoing on the planks of the bridge…So the pageant went its memorable way, and I see it now like an ancient cine film, much faded and blurred and with many breaks, but with here and there a sequence as vivid as the day it was shot. On it went through the centuries until we had reached the present. Ashdown Forest today. This is my bit. After the splendours and the drama of the past, the simplicity of the present. A tiny child coming down through the trees, quite alone, but carrying something. What is it? His toys. Yes, of course, his famous toys! Slowly the child makes his way over the grass towards the far side. Half way across he drops something, doesn’t notice at once, walks on a few paces, then stops and looks back. Yes, it was Eeyore. It would be Eeyore!…Behind him come the animals, grown larger, walking one behind the other. Pooh, Piglet, Eeyore, Tigger, Kanga…In the middle of the field the child stops and holds up his hand. One by one the others come up, form a circle round him and sit down…This is Ashdown Forest today, where a boy and his bear will always be playing.[7]

Aside the somewhat nightmare-inducing image below (a simpler time, long before the Wicker Man and Disney animation spoiled everything), amateur film footage of the pageant including a few seconds of Christopher Robin and his toys was discovered in the South East Screen Archive in 2001 and is available here (the film clip is downloadable at the right hand side of the page): 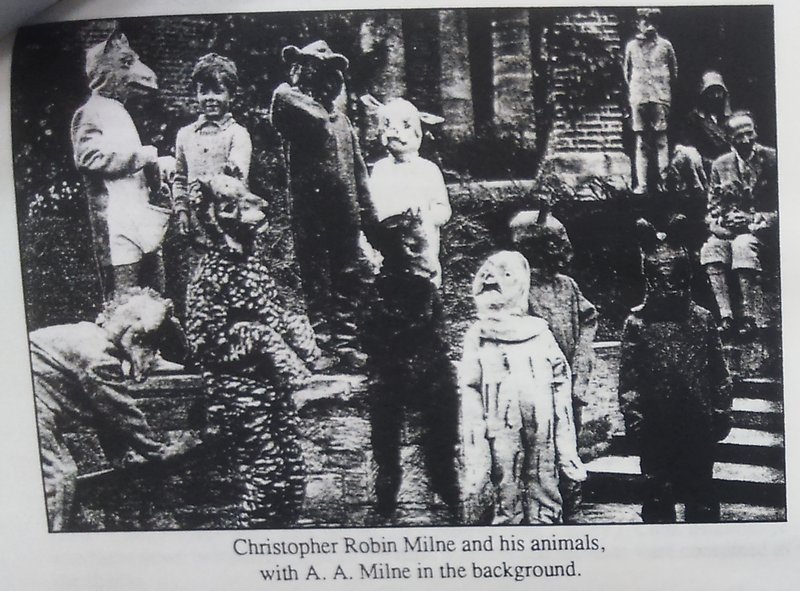 Above: Christopher Robin with Pooh, Piglet and friends.