The Story of the West: A Pageant of the Britons, the Vikings, the Traders and the Clans (Glasgow 1928)

‘For two and a half crowded hours ghostly figures from Scottish pageantry, wild, staid, pompous, and romantic, live a brief while again as they slowly cross the stage, linger, and disappear back into the pages of the history books.’ The Evening Citizen, 22 June 1928

‘The Story of the West’ was an ambitious historical pageant that sought to tell the story of the west of Scotland ‘in Four Great Episodes’ spanning the 6th to the 18th centuries: The Legend of Languoreth, The Invasion of Somerled, The Story of Glasgow’s Trade (told in three parts), and Prince Charles Edward in Glasgow. The pageant took place at Garscube Estate in the west of the city, the home of Sir Archibald and Lady Campbell of Succoth, and advertised a total of 7000 performers and grandstand capacity of 16,600 for each of the seven scheduled performances. The Glasgow pageant emphasised its historical credentials, pointing to its use of individuals related to the figures they were playing. Indeed, the Souvenir Programme (sold for a shilling) noted: ‘The final touch of romance to this stupendous undertaking is the fact that many of the Historical Characters will be represented by their direct descendants.’ The Writer of Scenario and Historical Advisor, the historian George Eyre-Todd, took responsibility for the attention to detail promised in The Story of the West. He was also responsible for suggesting the idea of having a pageant in the first place, pitching the idea in late August 1927 and approaching and securing the service of Walter G. Montgomery, the Honorary Organiser who had helped make such a success of the Scottish Historical Pageant at Craigmillar Castle in Edinburgh in July 1927. Sir Iain Colquhoun, Bart., of Luss was appointed Chairman of the Executive Committee in November 1927, and Eyre-Todd was instructed to formally engage Montgomery, who began work on the pageant in early 1928 with the help of his assistant organiser, a staff of three typists and a finance clerk (amongst others). A large corps of voluntary workers (150) had also been busily engaged in the two months leading up to the pageant in the twenty-five different departments, ‘each of which has grown to such dimensions as to resemble a large business’. Pointing to the existence of a historical pageantry market, reference was made to a payment of £103 being made for a selection of the costumes used in the Scottish National Pageant the previous summer (at a quarter of the price it would have cost for new costumes). 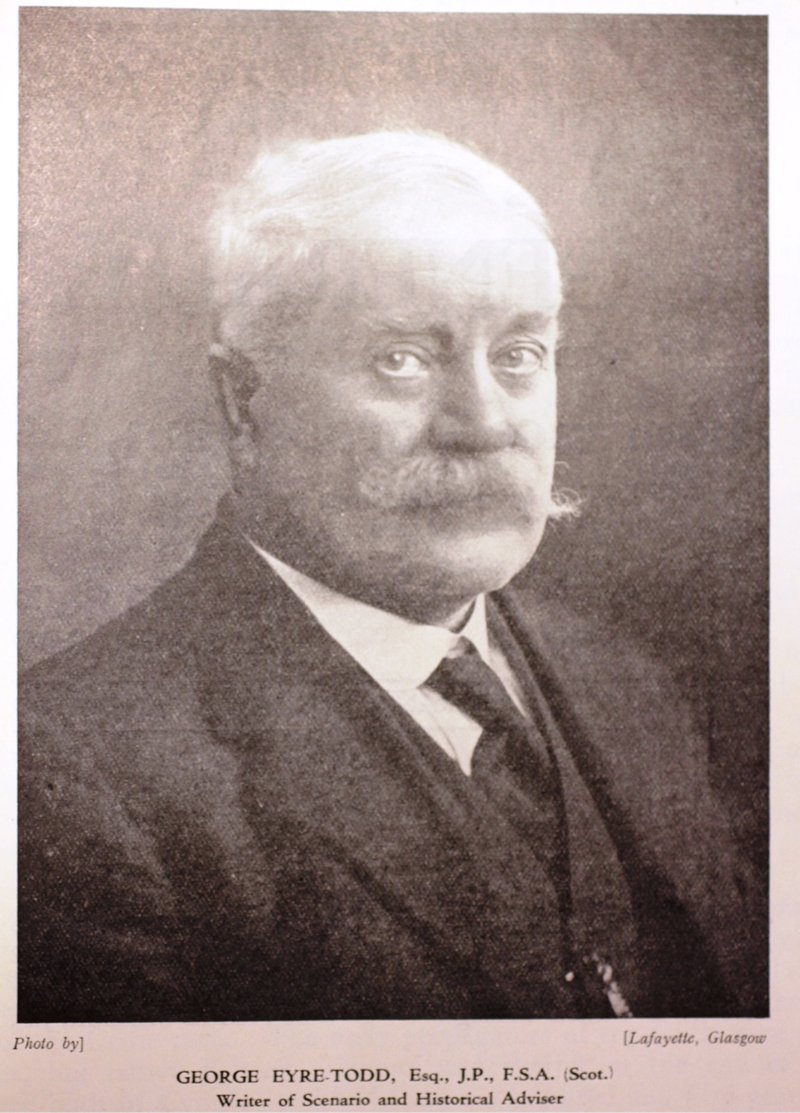 Image taken from Grand Historical Pageant : "the story of the West"...official souvenir programme (Glasgow, 1928), by kind permission of the Glasgow City Archives. 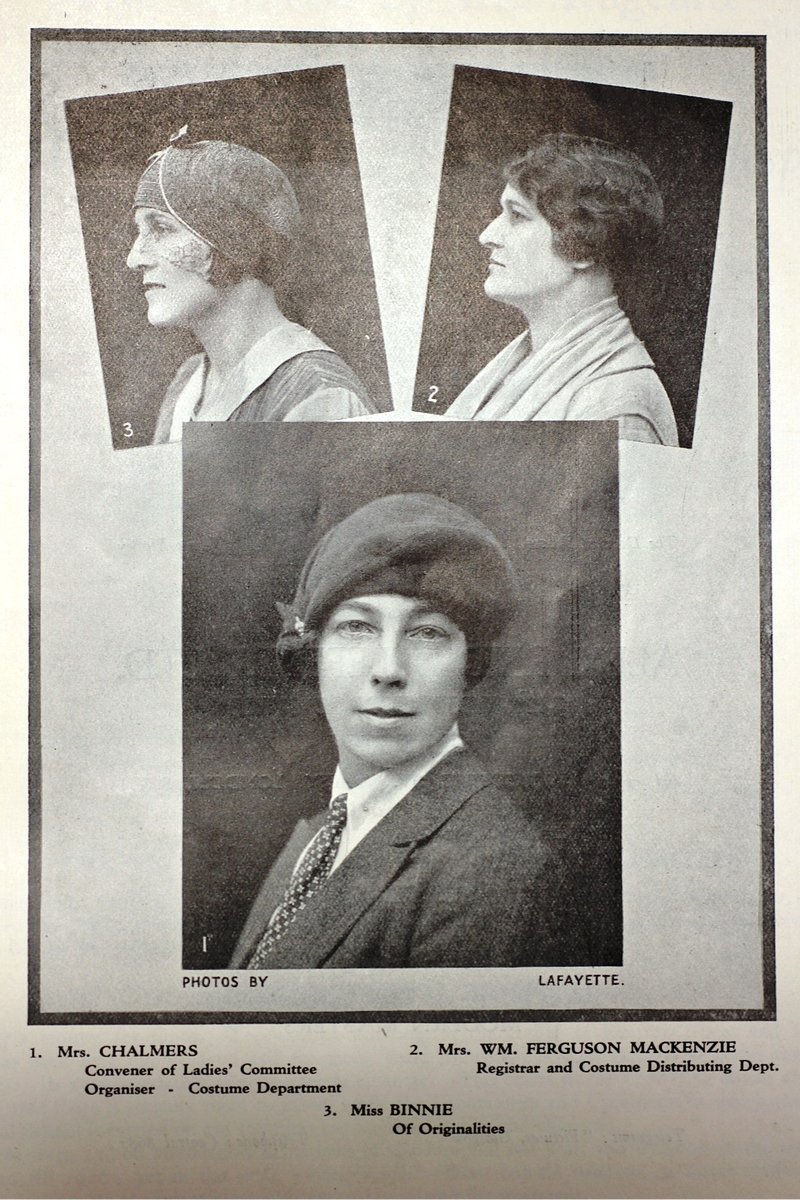 Ladies involved in the organisation of the Pageant. Image taken from Grand Historical Pageant : "the story of the West"...official souvenir programme (Glasgow, 1928), by kind permission of the Glasgow City Archives.

At this stage, the stage looked set for a successful pageant, one that might mirror – or even surpass – that of the 1927 Scottish Historical Pageant. But the drama contained in the historical pageant extended beyond its ‘Four Great Episodes’. The most tragic of these was the untimely death of its Organiser, Walter G. Montgomery, in March 1928, which meant that a replacement (Colonel George McClintock) had to be drafted in less than three months before the first performance took place. In mid-May, the pageant attracted some negative publicity when the Glasgow Herald reported a ‘Roman Catholic Protest’, after a formal complaint was made about ‘noteworthy emission of the Catholic Church’ from the pageant. This is interesting given the sectarianism that was a feature of lowland Scotland at this time, a period in which public discussion of the ‘Irish Menace’ was widespread. And then, at the end of May, the Writer of Scenario and Historical Advisor, George Eyre-Todd, tendered his resignation citing a range of issues largely arising from the difficulties that having two Secretaries on the Pageant Committee had created. He felt that this arrangement had produced problems that, had he been allowed to work ‘without interference’, might have helped to avoid the ‘enormous expense’ of the grandstands of Garscube, as well as the ‘disheartening conditions’ that were becoming ‘increasingly disagreeable’. Although a resolution kept Eyre-Todd on board until he resigned once again in October 1928, the minutes of these meetings illustrate the tensions and difficulties that were experienced amongst the main organisers. More problems were to beset the Glasgow Pageant later, as we shall see... 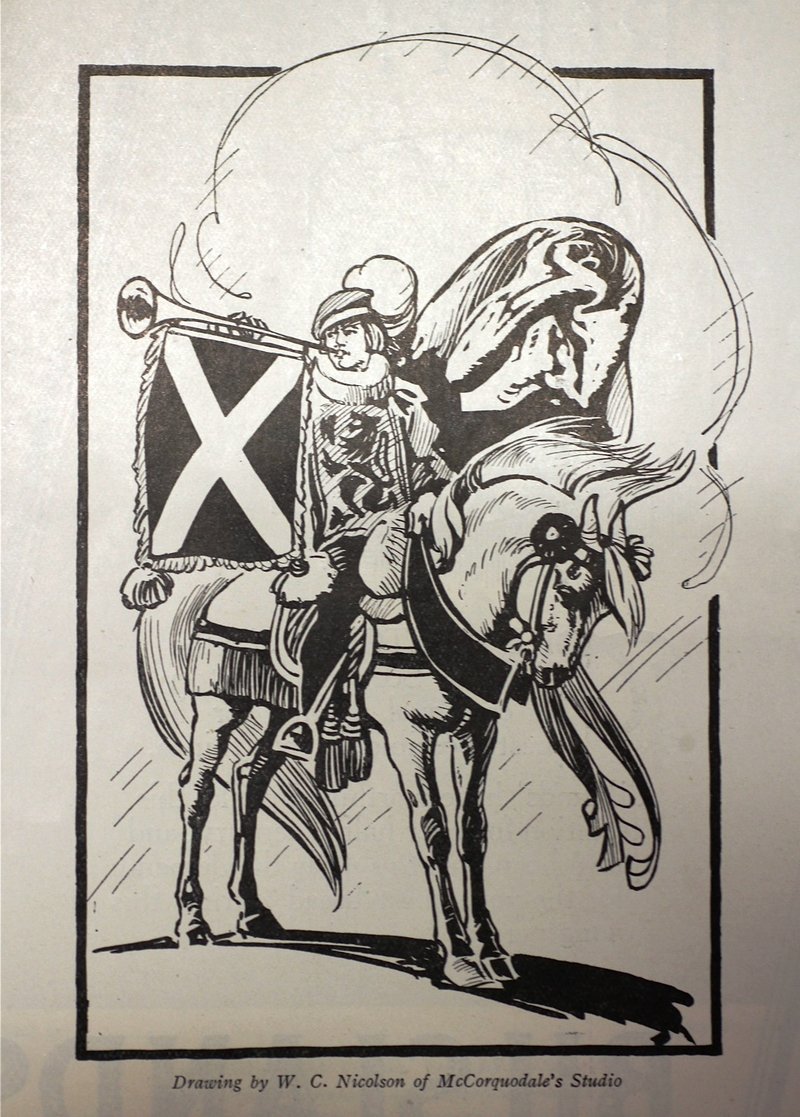 A drawing of a Herald Bearer. Image taken from Grand Historical Pageant : "the story of the West"...official souvenir programme (Glasgow, 1928), by kind permission of the Glasgow City Archives. 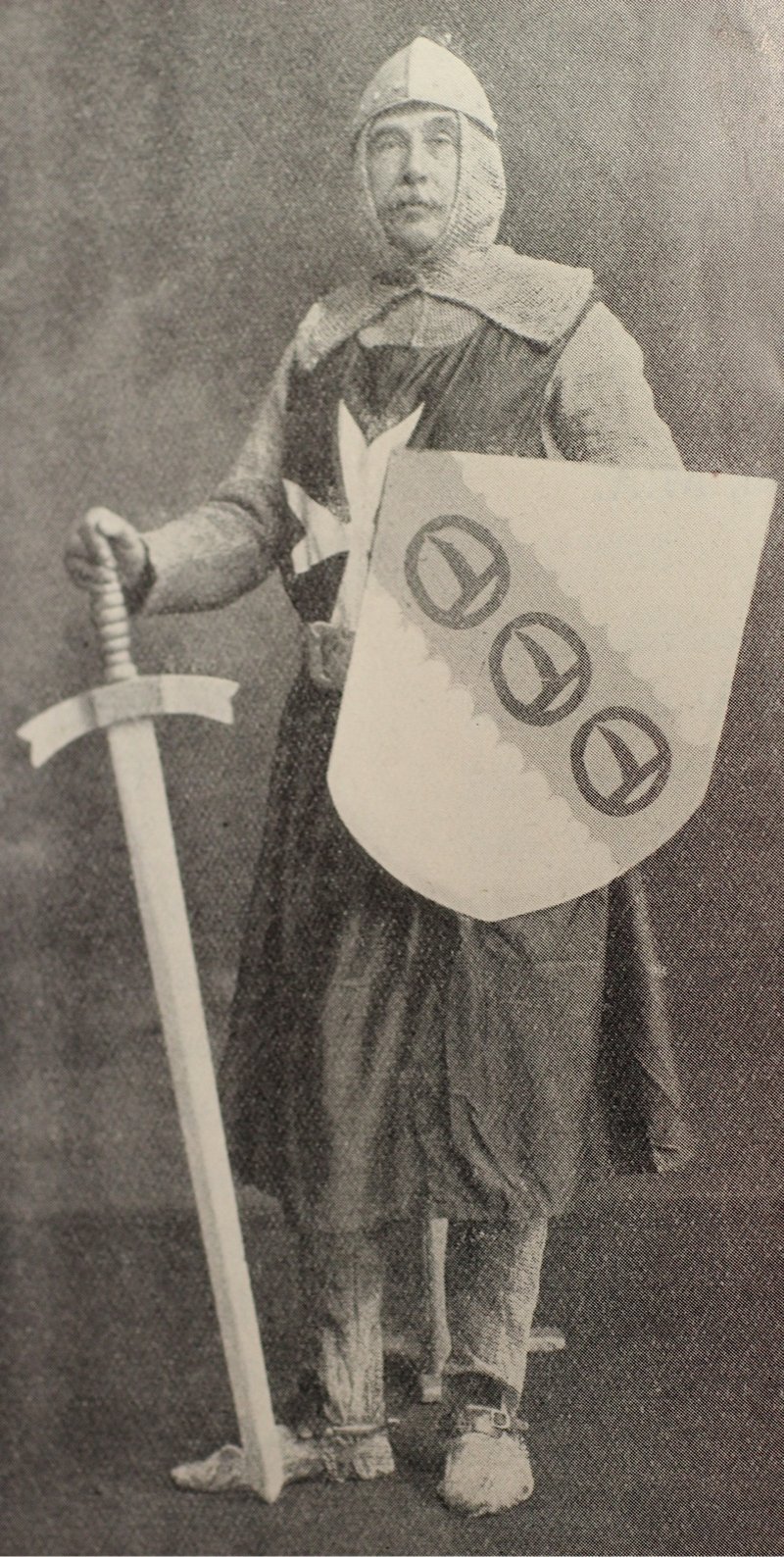 Sir George Stirling, Bart. of Glorat, as Third Leader of the Knights of St. John. Image taken from Grand Historical Pageant : "the story of the West"...official souvenir programme (Glasgow, 1928), by kind permission of the Glasgow City Archives.

The Story of the West began with the legend of St Mungo and the founding of the city of Glasgow (and arrival of Christianity to the area), starring the mythical King of Strathclyde, Rhydderch Hael, and Queen Langoureth. The following episode, set in the 11th century, featured Viking attacks and battles between the Vikings and the Britons in ‘strenuous’ fighting scenes that were so realistic that a total of 150 injuries were reported, although none were classified as ‘serious’. Indeed, there were a total of 218 injured during all the performances – perhaps shoring up the stereotypes of Glasgow as ‘no mean city’! The third episode actually involved three different scenes, which told the Story of Glasgow’s Trade between 1258 and the Reign of Charles II – the latter sub-episode featured a dizzying array of characters and activities, which included drunken sailors and porters, ships bound for France and Virginia, captured Covenantors bound as slaves for the plantations, golfing in the background, galloping Dragoons, and a captured Dutch ship being brought back to Glasgow. In the final episode, which is set in Christmas Week 1745, the setting is the Jacobite rebellion and the raising of a force to fight the Jacobite Army at Culloden. There is a potent mix of drama, humour and romance in this episode, and an interesting representation of Scottishness familiar from picture postcards that were popular from the Victorian era onwards, that showed Scottish washerwomen – usually Highlanders – tramping their washing in tubs and in streams. In this episode, we see a scene featuring Glasgow women and servant maids doing their washing on the grass in Glasgow Green (including tramping blankets in tubs) until army volunteers doing their drill march over some of the bleaching linen and are assailed and driven off by the women! Between each episode, ‘The Heralds of the Pageant’ (four heralds on horseback) made a ‘spectacular entrance and exit at the gallop’.

Douglas Douglas-Hamilton, The Marquis of Douglas and Clydesdale, who played the part of Rhydderch Hael, King of Strathclyde. Image taken from Grand Historical Pageant : "the story of the West"...official souvenir programme (Glasgow, 1928), by kind permission of the Glasgow City Archives. 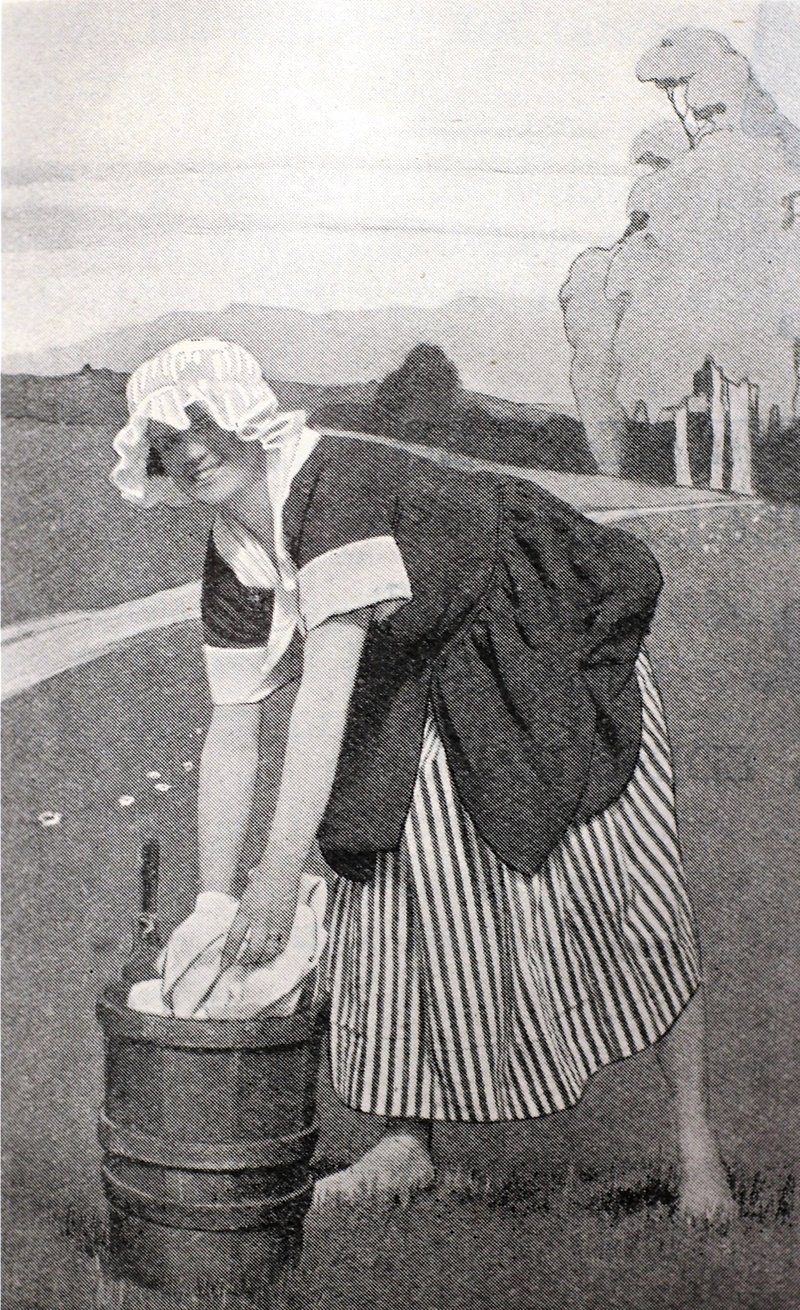 Laundrymaid on Glasgow Green. Image taken from Grand Historical Pageant : "the story of the West"...official souvenir programme (Glasgow, 1928), by kind permission of the Glasgow City Archives.

A drawing of the women chasing army volunteers for tramping on their washing. Image taken from Grand Historical Pageant : "the story of the West"...official souvenir programme (Glasgow, 1928), by kind permission of the Glasgow City Archives.

As many people know, Glasgow does not have the most temperate climate, even in the summer months, and sadly the pageant ultimately fell victim to persistent rain and cold weather. The final dress rehearsal had to be abandoned due to torrential rain which, combined with the other mishaps that had befallen the pageant committee in the run up to the pageant, should have acted as a sign that success might be difficult to achieve. Seeking to muster support and attract the public ‘to turn out in their multitudes’, the local Evening Citizen newspaper noted:

‘It is an act of courage to produce in Glasgow a pageant on a grand scale. Open-air events require for their success ideal weather conditions, and it will be a thousand pities if the tremendous effort and the vast amount of gratuitous service that has gone to the making of Glasgow’s pageant should be spoiled by cold and rain.’ (Evening Citizen, 25 June 1928).

Throughout the pageant, the Evening Citizen reminded its readers that the object of this pageant was to raise funds for the Incorporated Glasgow Dental Hospital, which was described as ‘the “Cinderella” of the Glasgow Hospitals’, and urged them to show their support by making a point of attending. Extra performances and reduced ticket prices, including options for 2s for the centre stand and 1s for either wing, were publicised. It had been estimated that a total of £90,000 was needed to build and adequately equip a new Hospital, to which the Glasgow Pageant Committee hoped to make a significant contribution. Sadly, this was not to be. The Story of the West made a loss of just over £3000, meaning that no donations could be made to the Glasgow Dental Hospital, the building of which was delayed for some years due to a lack of funds (and compounded by the economic depression of the 1930s). Even a visit by HRH Prince of Wales to the afternoon performance on Friday 28 June could not rescue the pageant – the press reported that ‘The Smiling Prince’ had arrived in Glasgow ‘looking bronzed and fit’, with the sun shining. However, the 15,000 who turned up for that evening’s performance faced a ground ‘sodden’ after heavy rain, and inclement weather during the performance. 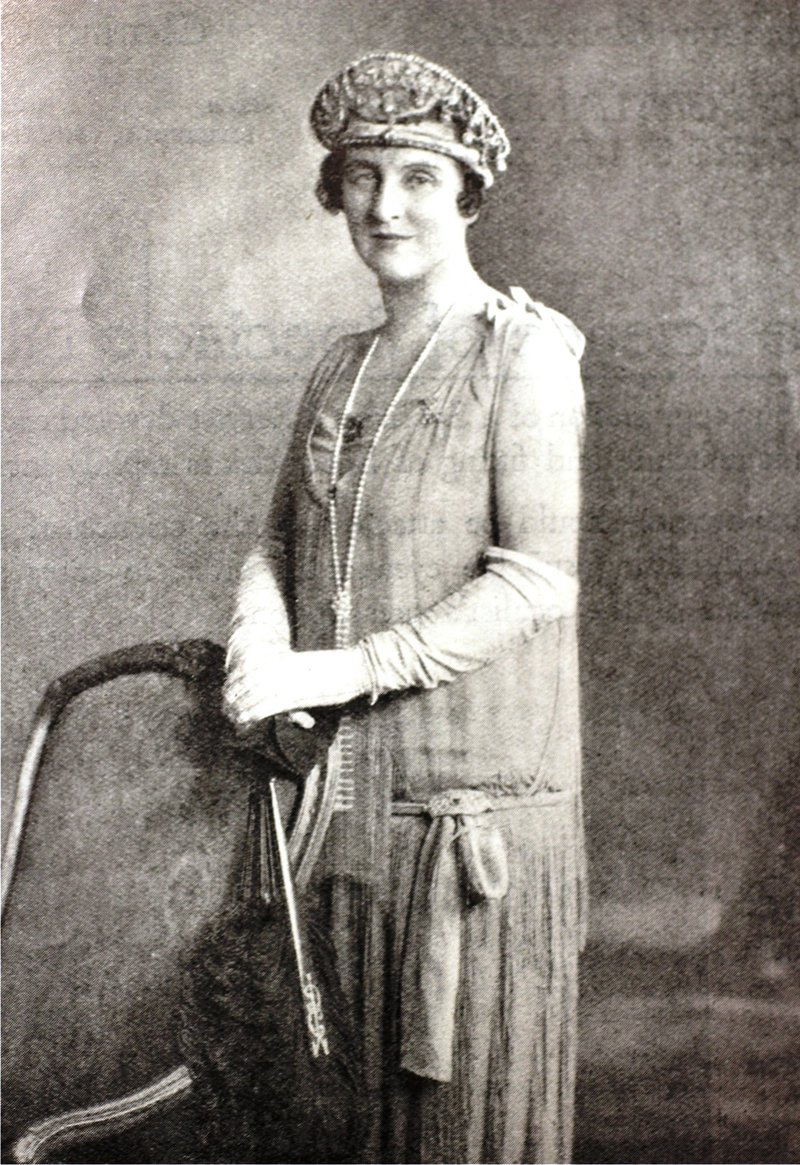 Lady Clementina Waring, playing part of the Queen of Alexander II. Image taken from Grand Historical Pageant : "the story of the West"...official souvenir programme (Glasgow, 1928), by kind permission of the Glasgow City Archives.

A statement on its financial failure was issued to the press by Sir Iain Colquhoun, chairman of the pageant committee, in early August: ‘It is pointed out that in all projects of the nature of the Pageant the determining factor is the weather, and that under the conditions which were experienced success was out of the question.’ Demonstrating the scale of the bad weather conditions, press reports described a ‘lady chorister’ who ‘suffered the effects of cold and wet’ and required an ambulance wagon, and at the end of the final performance, Colquhoun thanked ‘the little children who had waded through seas of mud night after night to carry out the dancing scenes.’ Anecdotally, it has been suggested that this pageant was the ‘last swansong’ of the Glasgow landed gentry.