The Bury St Edmunds Pageant of Magna Carta made a pretty decent profit of £2,158, 17s 11d – about £33,000 in today’s money. With the imminent closure of the Playhouse theatre, yet good health of three cinemas, one local man hoped that the pageant was ‘proof of what can be done’ and that some of the profits could go to safeguarding dramatics in the town. But, following the pageant, there was only a small amount of support for this.  The decision of where the money should go instead became a highly public and petty argument, with the Mayor, councillors, clergymen, press, and local ratepayers all weighing in with varying degrees of anger. Claims of a right to input came from ratepayers especially, since the pageant had been fronted by their rates. As one wrote to the newspaper, ‘the ratepayers would have been called upon to foot the bill if the pageant had been a big flop, so the profit is surely theirs, and they can say as how it should be disposed of.’

The pageant players, too, wished to make their voice heard, and some even sat in on the council meetings when the topic was discussed. A local woman, Pamela Harris, suggested that the money should be used to give mementos to the cast – like a signed certificate, or a Magna Carta mug for the younger performers.  Other suggestions included improving the public baths, or providing playing fields – though the latter suggestion was shot down by councillor Mrs. Jorisch (a relative of comedian, actor and writer Stephen Fry), who declared to the council meeting ‘not everybody could gambol about on playing fields’, adding that she ‘wasn’t “being funny”’ when she suggested the money should go to the new sewer.  From the beginning there was a groundswell of support for the Cathedral Extension fund – clearly appropriate considering the pageant took place in the Abbey gardens and was so strong on ecclesiastical history.  After around four months of debate, the Publicity Committee came to a decision:

‘Having regard to the wholehearted support received for the pageant from residents in all parts of Suffolk, the surplus be given, subject to approval of the Minister of Housing and Local Government, to the appeal fund to be launched by the Mayor as a contribution to the Cathedral Extension Fund and with a view to the construction of a bay, to be associated with the Pageant, as part of the new Cloister.’

But this was met with even more heated debate in the council meeting, and eventually referred to the Development Committee for further consideration. Disagreement was for a variety of reasons. On the one hand, spending the money on a charitable purpose like the Cathedral would contravene a now-discovered original minute from early 1958 that had confirmed that ‘any profit accruing from the Pageant would go to the General rate fund.’ As the councillor Mr. R.F. Faiers stated, ‘We have got a moral obligation to the ratepayers of the Borough to stick by this decision, even if we want to rescind it.’ More generally there was opposition towards using the money for a cause that only benefited a certain community. As the councillor Mr. A.G.T. Shearing surmised, ‘We all agree that the pageant was made possible by the efforts of all who took part, irrespective of creed or belief, whether Anglican, Roman Catholic or noncomformist, and to give all the money to the Cathedral would not be fair to all the other religious bodies.’

As well as the aforementioned opposition of Jorisch to playing fields, councillor Mr. J.S.H. Glasswell reminded the corporation that it was already their duty to provide such things out of the rates, irrespective of the pageant and its profit. Jorisch, in a startling outburst, produced a copy of an architectural journal and read out some criticisms of the Cathedral to bolster her opposition. She added ‘I feel like that about it. I said a long time ago that no money of mine would go to bolster up such a fake job.’ She then pointed to her hat and declared ‘this is three years old’, worn because she had sacrificed her ‘new hat money’ to be a patron of the pageant. She was, thus, adamant that ‘the Cathedral was [not] going to get it [the profit] under false pretences.’

The Bury Free Press had it right when, the following week, they ran the headline ‘Mean and Miserable Arguments in the Recent Council Debate’.  Most upset by the council’s reaction was the Cathedral Provost, John Waddington. Responding to the Press, he riled

‘You would think that the Borough Council would be 100 per cent behind the Cathedral Extension Scheme that will put Bury St. Edmund’s so much more on the map. But, alas, although many of them are keen supporters, a few of our city Fathers and Mothers do not seem to have caught the vision of what we are trying to do and what advantages and responsibilities come to Bury St Edmunds by its having been given the distinction of achieving the status of Cathedral Town.’

Provoking his ire in particular was hat-enthusiast Mrs. Jorisch. While admitting that he liked her ‘very much’ and enjoyed ‘reading the books she writes and visiting her lovely house’, he still thought that ‘she was very naughty to mislead the council and others by a remark which could have such a damaging effect upon our efforts.’ According to the Provost, the damning article about the Cathedral’s architectural merits, or lack of, was actually just ‘a few lines of personal opinion by one contributor to the Architecture Review in June 1959’, whose target was mostly the original builder of the Cathedral in the 15th century, John Wastell; it was due to the faults of the original building that the critic had registered ‘a mild protest against the extension.’ According to the Provost, the extensions would actually ‘improve the present building and give it better proportions and make good its deficiencies.’ He finished by taking a humorous swipe at Jorisch, declaring that she ‘was talking through her three year old hat, which I suggest she should now eat in public as a sign of penance!’  In the same issue another local man, Bernard Smith, thought it apt to remind that, since the inspiration for the 1959 pageant had been Canon Tydeman’s St. Edmund Pageant in 1957, the origins of the pageant had been ‘very definitely a religious occasion’; the Cathedral, then, was a very worthy recipient of the profit.

In the end the council came to what the Mayor described as a ‘happy solution’ to the debate; no money for the Cathedral, but public shelters to be constructed in the Abbey Gardens - something that would enrich the environ of the Cathedral whilst still being available for the use of everyone. The Provost lamented that the council had been ‘swayed by minority pressure groups and false democratic arguments’ in changing its mind about giving the profit to the Cathedral Extension scheme, but sighed ‘I am glad the money is going to provide shelters in the Abbey Gardens rather than be ploughed back into the rates or used towards the new sewer.’  Soon after the decision a paved, open plan water garden was laid out, with a pair of shelters that looked distinctively of the period; this basic design remains today, though the garden has been enclosed, expanded with extra flowerbeds, and recently refurbished following a £40,000 donation. 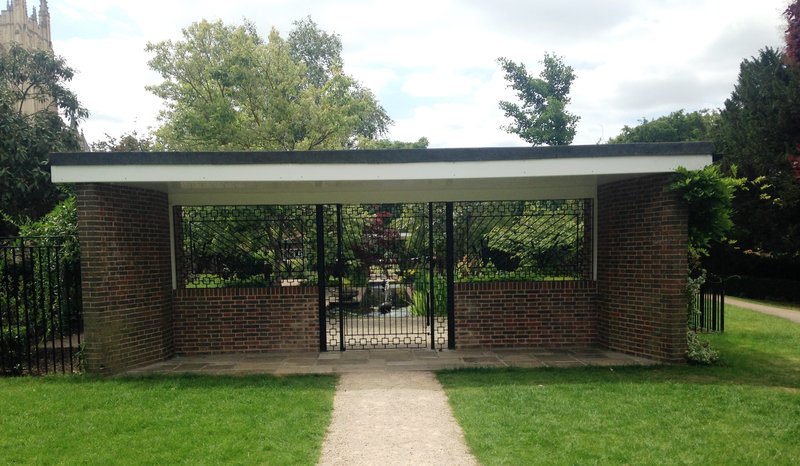 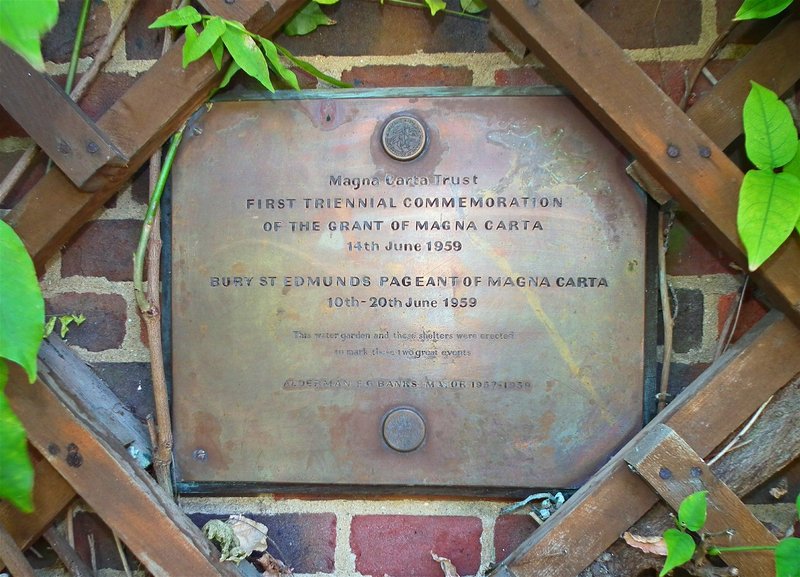