Last night (Monday 8 June) Tom and I went to Bury St Edmunds for the third of our pageants film nights in Moyse’s Hall Museum, where our exhibition is currently being staged. Forty-seven people were present to watch the films, meaning that more than 130 have attended the three film nights. Half a dozen or more of those present on Monday had performed in one of the pageants.

We showed three films. The first was a silent film of the 1907 pageant (to read more about this event see here). The action was explained by Tom as the film went on. A full version can be seen on the East Anglian Film Archive (EAFA) website. The final video was of the 1970 Edmund of Anglia pageant – a gory spectacle in which the pageanteers revelled in the medieval horrors of ten centuries earlier. The full version can also be seen on the EAFA website.

In between, we showed the whole of the 1959 pageant film, in colour. In fact, this was not only a pageant film, but also an account of the historical and contemporary life of Bury St Edmunds on the eve of the 1960s. Narrated by Richard Tydeman, who wrote the pageant script, the film explains the economic life of Bury and its relationship with its own past. The second half of the film consists of long extracts from the pageant, voiced-over by Tydeman. I had not seen this film before, and was struck by the complexity of the pageant’s staging, which involved performers moving around a set that was itself positioned between bits of the abbey ruins. 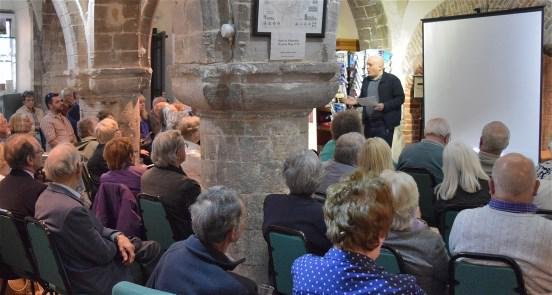 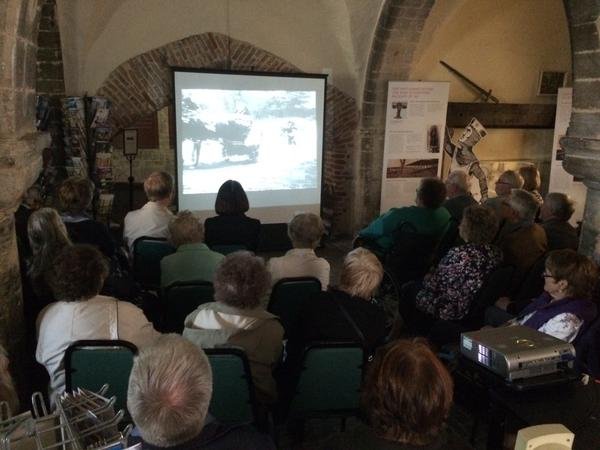 The 1959 pageant was – as Tom explained to the audience – one of the most impressive pageants of the 1950s, doubly so as it came at the end of the decade when historical pageantry had declined from its high point at the time of the Festival of Britain and the Coronation. It was visited by dignitaries from across the world, and the film shows something of its scale and ambition. You can read more about the pageant here.

The audience obviously enjoyed the show. Some people in the front row were singing along to the music, and conversation flowed in the interval. Some brought their own memories, photographs and artefacts. We are particularly grateful to Jill Burlingham, who worked with 1959 pageant-master Christopher Ede, and brought us some superb photographs from the pageant, which will be digitised and uploaded on our website soon.

Just two days earlier, we had been in St Albans for a pageant ‘study day’, where Peter Swinson, son of pageant-master Cyril, showed us film of the 1948 and 1953 pageants. Neither had its own soundtrack, but Peter played the reminiscences of some pageanteers, recorded while watching the 1948 film, as we in turn watched it.

Our experience, and that of many others, shows that people simply love watching historical films. Pageants, as large visual spectacles with colourful dress and plenty of movement – and often involving both children and animals – are an ideal subject for a film showing. Thanks to Moyse's Hall for helping us put-on these film evenings!

To see photos from the other film evenings, see here