During the initial burst of 'pageant fever', souvenirs were big business. Louis Napoleon Parker always stressed that the point of his 'folk-plays' was not to make money, but to instead bring the community together, dissolving distinctions of class (if only momentarily!). But plenty of official and unofficial vendors realised the potential profits that could be made. The ubiquitous souvenir of pageantry throughout the twentieth century has been the illustrated and colourful programme. Almost always costing a shilling or less, programmes fulfilled many purposes. The offical programme would explain to the reader what the purpose of the pageant was, and what the episodes depicted, and a local historian would usually give a detailed historical background to the episodes. The best would contain photos and drawings, some even in colour, while also providing an opportunity for local firms to advertise their wares - often by providing tenuous links to the pageant itself.

There were three programme souvenirs for the pageant in 1907. Probably the most important was the 'official souvenir', printed and published by the local firm FG Pawsey. It contained 52 photos taken while the Pageant was in progress; 4 coloured portraits; a view of the Pageant Ground; and portraits of Parker and the Mayor of Bury, Owen A Clark. It cost 1 shilling. 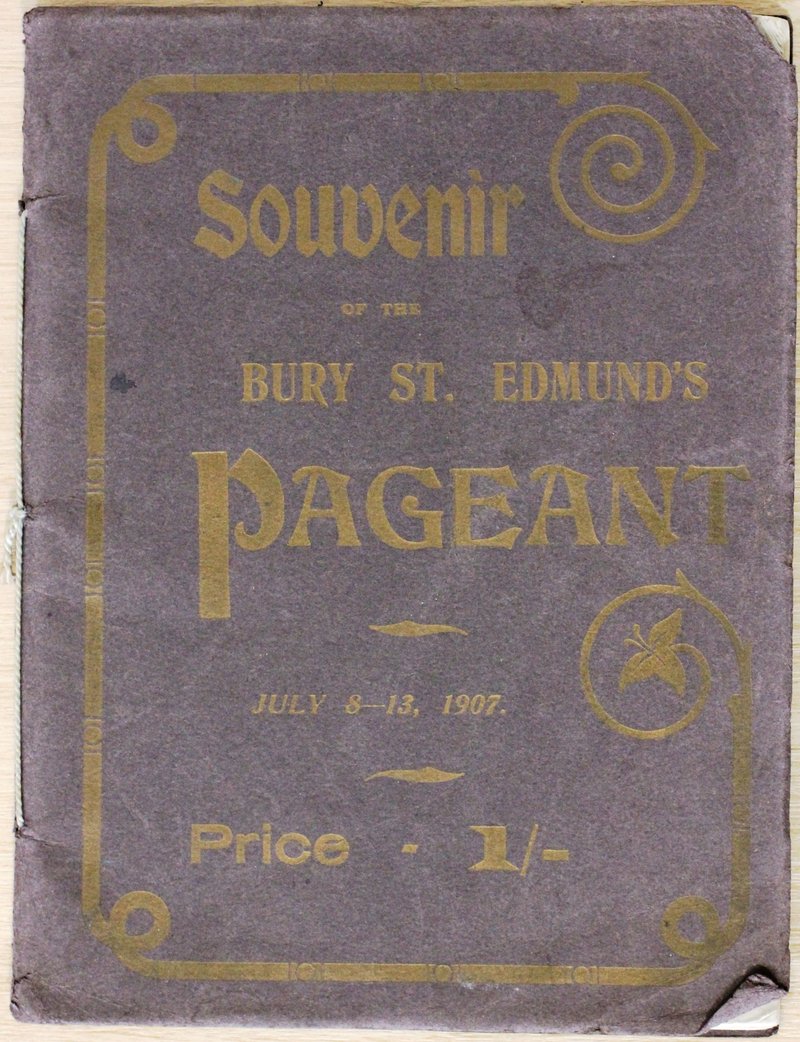 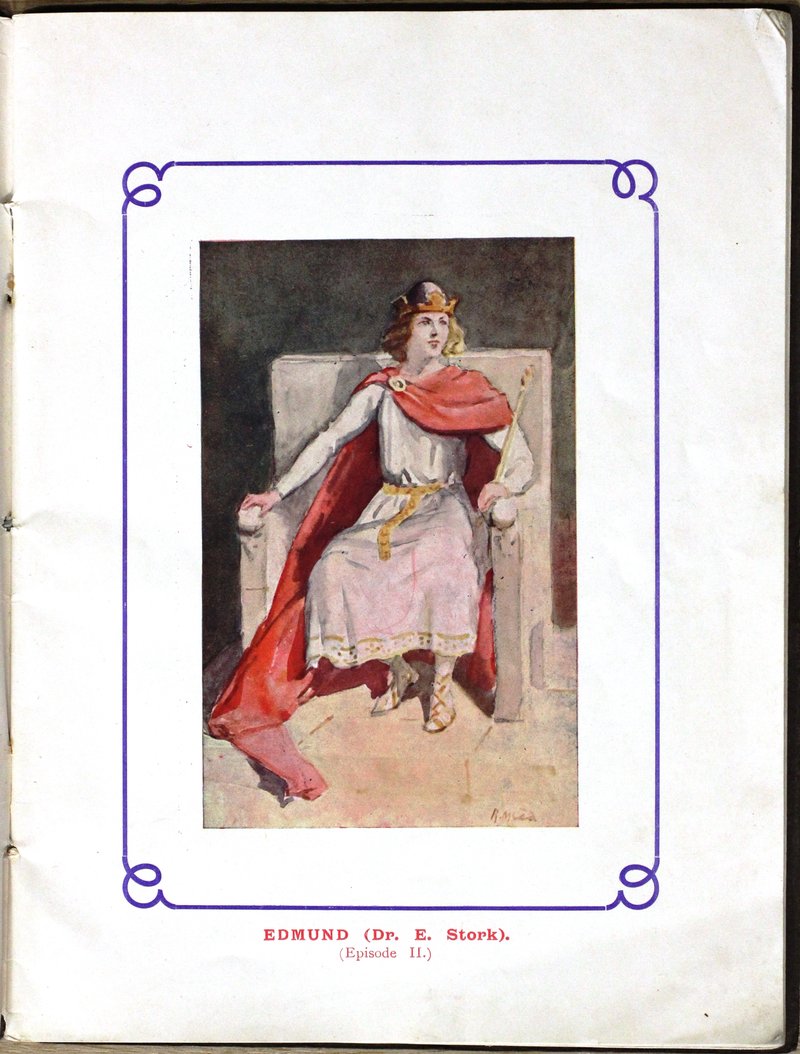 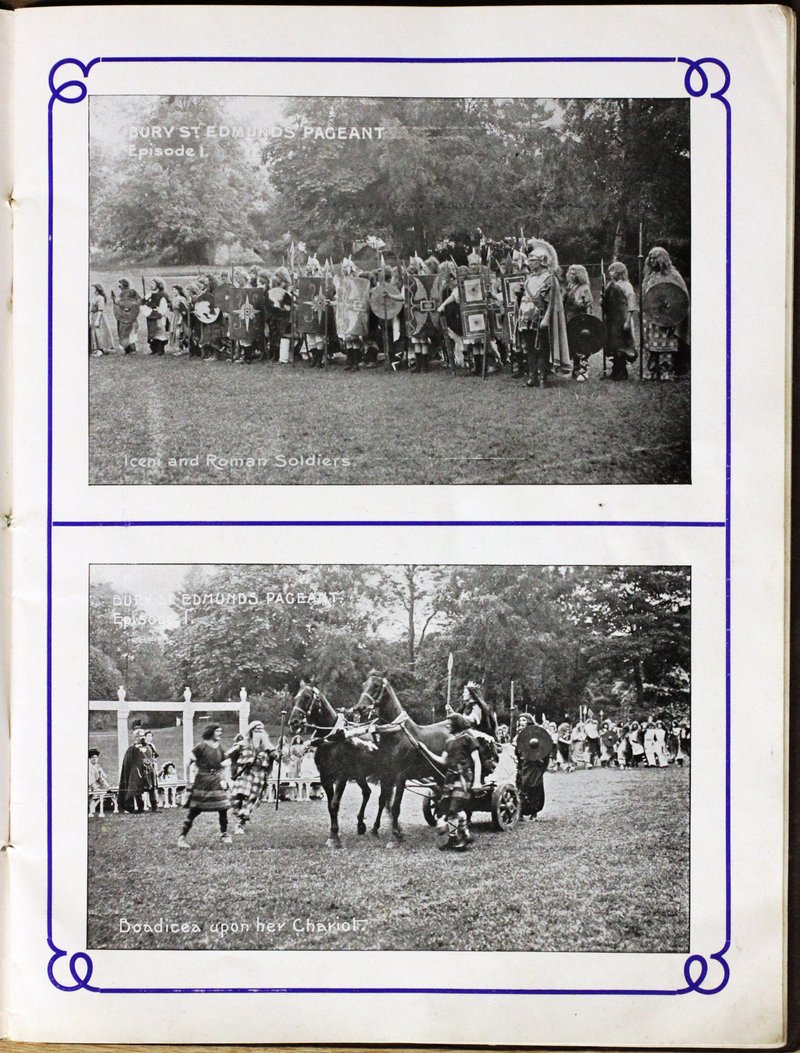 Another souvenir was reproduced from a special issue of the Bury Free Press. Sold for the much cheaper price of 3 pence, it was a lot more basic and shorter than the Pawsey souvenir. 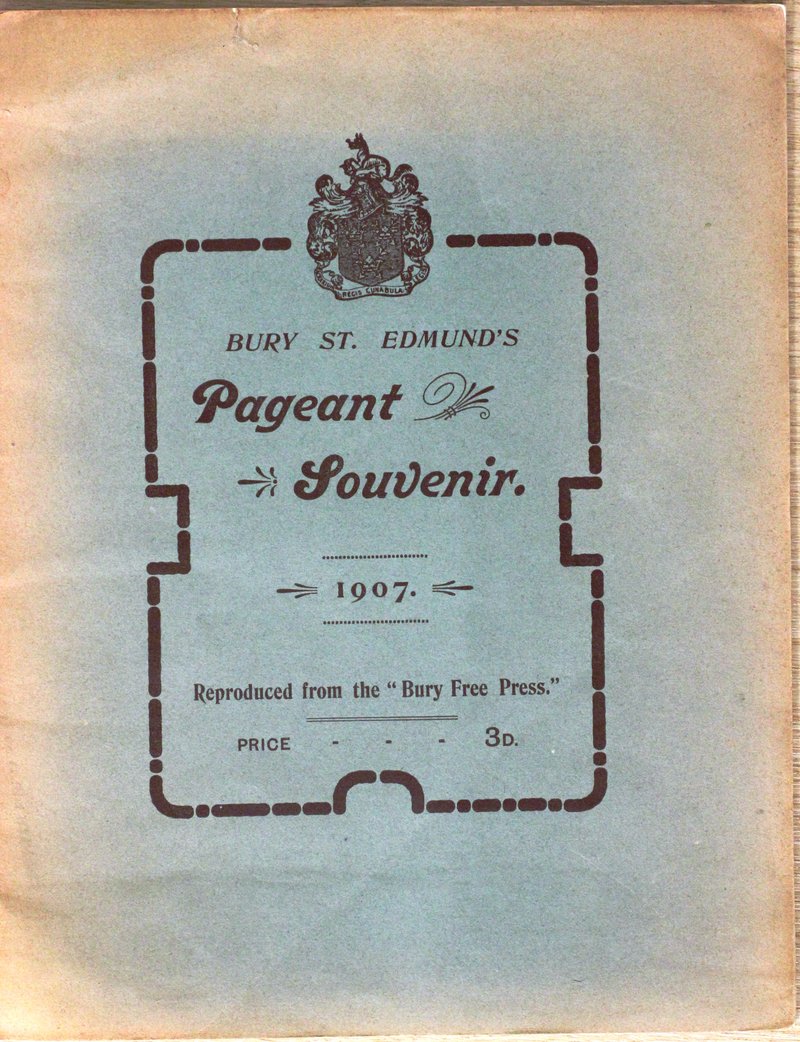 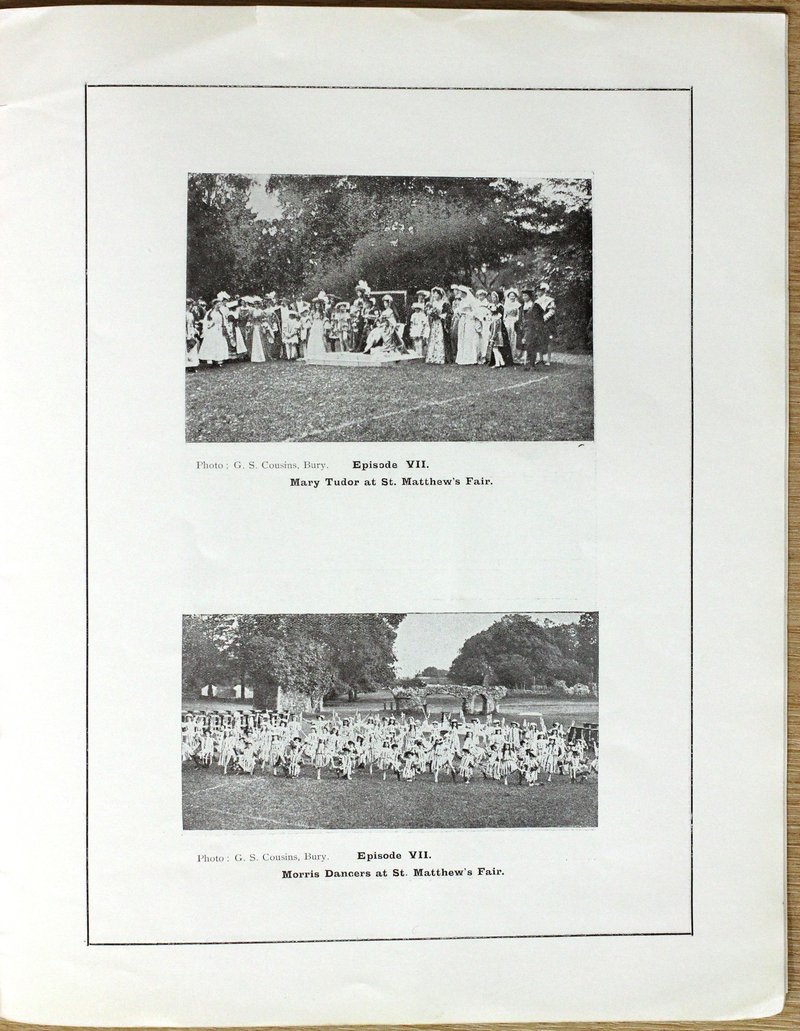 Finally, the magazine The Connoisseur also published a special edition which acted as a souvenir. As well as colourful reproductions of paintings, it included lots of information about the history and culture of Bury St Edmunds, and small photos of the leading civic figures who organised the event. 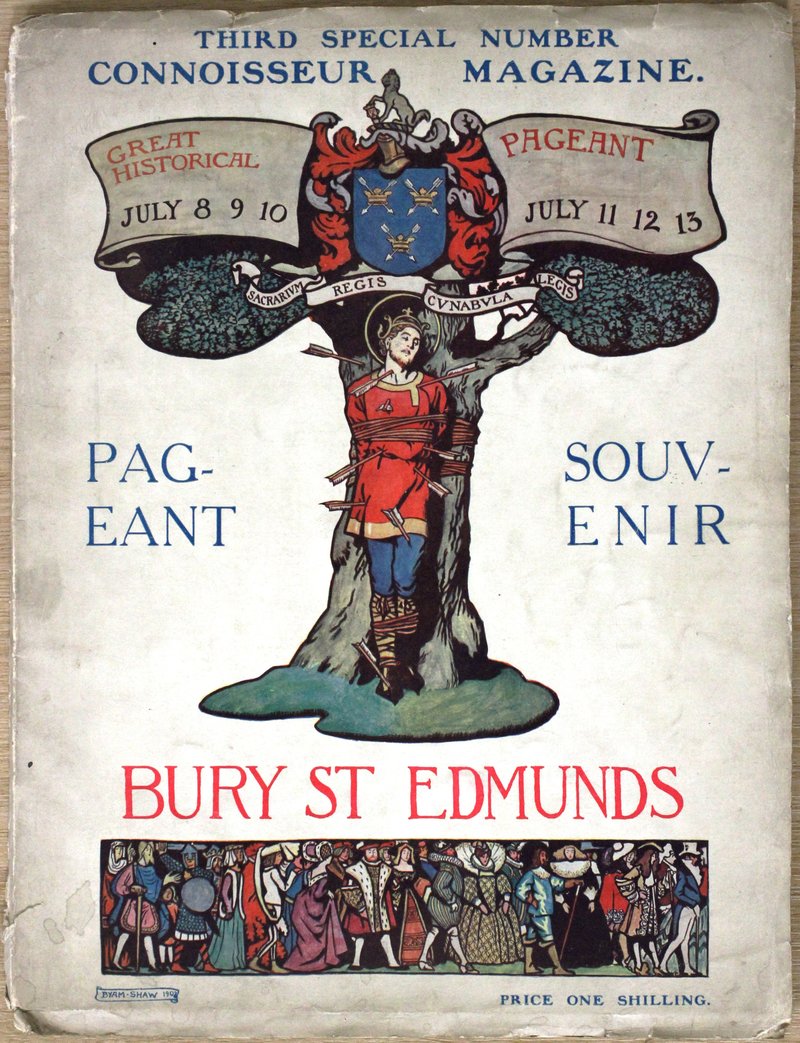 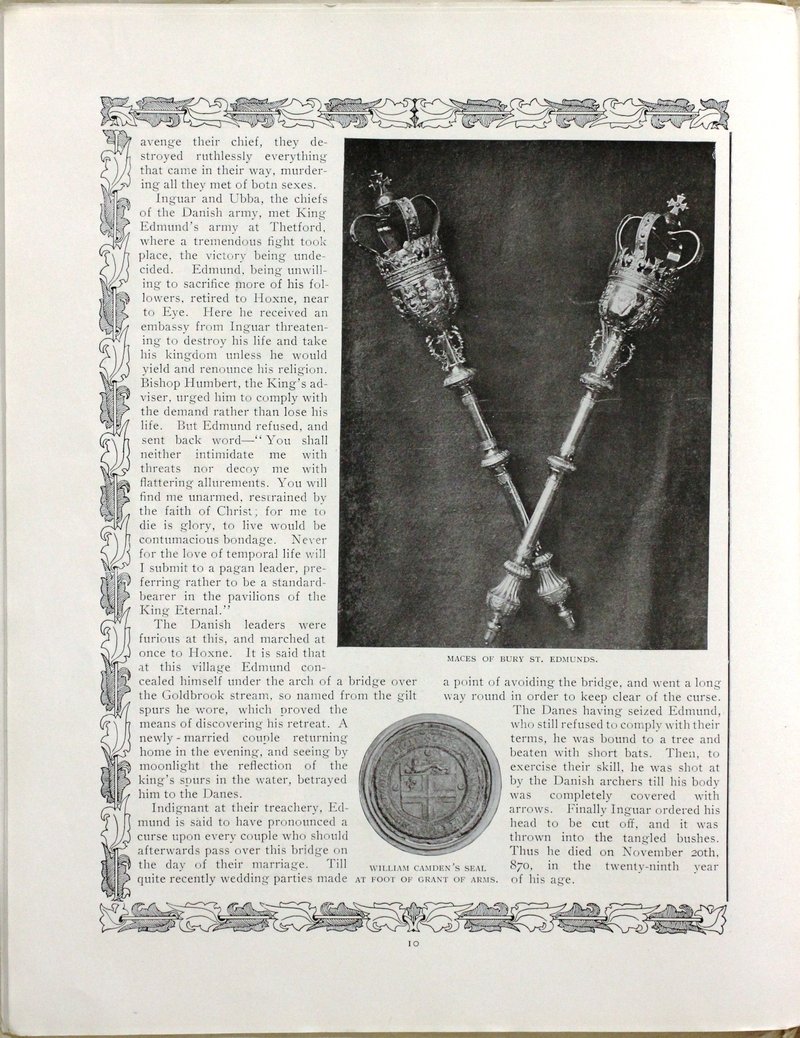 Also incredibly common were postcards - from many different producers. Some of the postcards we have for Bury St Edmunds were signed by the performers, such as this one: 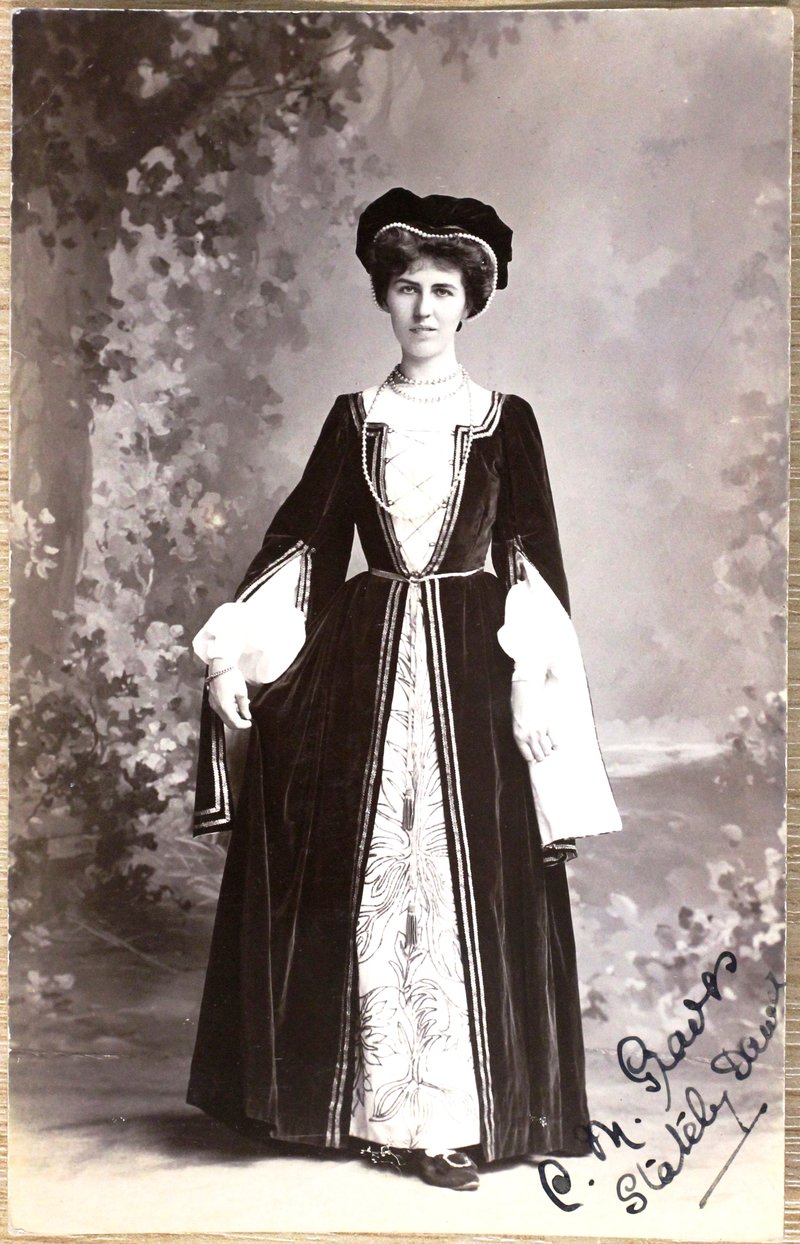 Others have writing on the back, and were actually sent. This one even talks about the pageant performance: 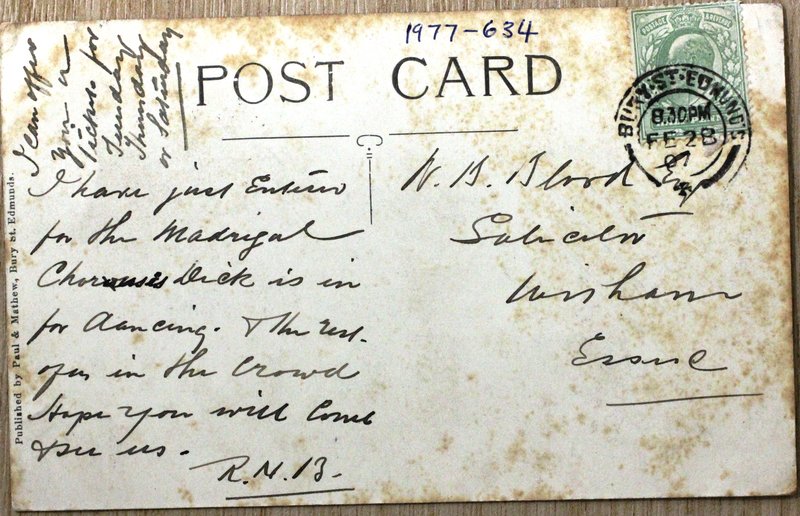 Other souvenirs also included commemorative china, and even medallions - such as this one at Bury St Edmunds: 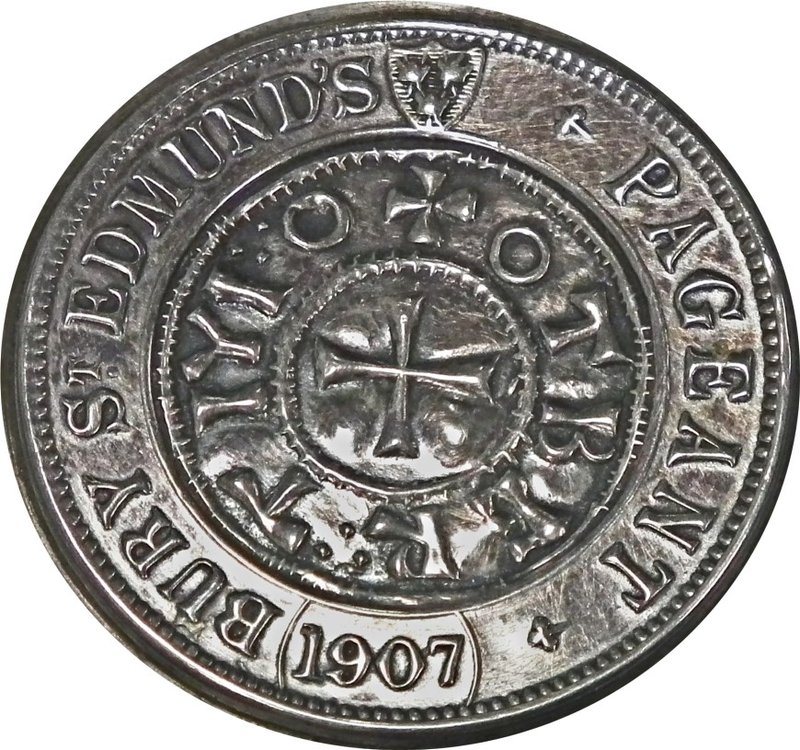 This commemorative medal was based on a silver coin found some sixty years previously and minted (probably) in Bury during the reign of Edward the Confessor. The replica of this coin formed the centre of the medal, with, on the observe side the rim was inscribed with ‘Eadmund King and Martyr 855-870’, with a bunch of arrows at the top, and, on the reverse side, “Bury Saint Edmund’s Pageant, 1907”, with the present arms of the town. Produced in bronze, silver, silver gilt, and gold, it was made in three sizes – the largest being ‘the size of a florin’ and weighing 7.5 pennyweights.

For those who went to the pageant, a souvenir was a memory of the experience that could keep the event alive for long after. Many of the programmes we have seen were signed by the owners, or even other cast members. Some had been altered or coloured in - maybe by children, bored of the pageant! Postcards, of course, were usually meant to be sent. Many were, but many seemed to have been kept for personal reasons as well. Some people even made their own souvenirs - but that is a blog for another day...

To see these souvenirs 'in the flesh' - along with souvenirs for the other pageants in Bury St Edmunds - come to our exhibition at Moyse's Hall, which is on until August 2015.

*All photos by kind permission of St Edmundsbury Heritage Service.