ENCORE FOR THE CARLISLE PAGEANT!

In 1951, the pageant used the same script as that performed in 1928, however, this time there was amplification which meant that the audience could hear the words spoken. The running order of the episodes was again as follows:

Epilogue, Grand Tableau, and March Past

And this time there were even more performers with a cast of 5000 taking part; at the time this was estimated to mean that an incredible 1 in 20 of the local population were involved with the pageant and almost every family had at least one member playing a role. All of which  meant that the 1951 pageant was an even bigger spectacle than its predecessor had been, and demonstrated the tremendous faith Carlisle had in its ability to put on a good show of its history.

Big audiences were expected and they came!  After years of wartime rationing and post war shortages, during which people in Carlisle had probably gotten used to keeping calm and being patient, this was again demanded during pageant week when the compact city of Carlisle must have been overflowing. The Cumberland News told its readers that:

'All good citizens should help to make visitors comfortable and at home... be helpful if asked questions; and show consideration in the queues and in the crowds...'

We're sure friendly Cumbrians rose to this challenge! Some things were not quite as swanky as they had been in 1928. For example, wartime 'make do and mend' was still part of everyday life as clothes rationing persisted but on the whole, this pageant was every bit as successful and as much fun as before. 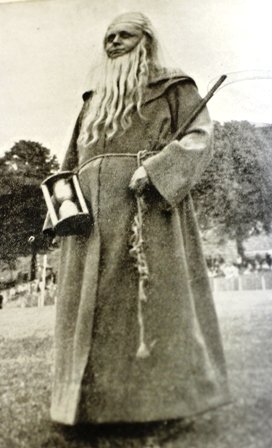 In 1951, many costumes had to be made out of recycled material. This included old sackcloth. We're not sure what Father Time, seen here, was wearing in terms of fabric but it does look to be a bit scratchy!

A YEAR FOR CELEBRATION!

Rationing or not, 1951 was a big year for celebrations. As is well known, this was Festival of Britain year and events were held up and down the UK. These festivities were meant to herald the arrival of a new age in British scientific and technological innovation, and in cultural success. With the dark days of the Second World War behind it, the Festival was to be the start of Britain's recovery.  But history and the achievements of the past were not left entirely behind and many historical pageants were held that year.

It is often forgotten that the Civic Week and the pageant held in Carlisle that year were the city’s contributions to the nationwide Festival. Here is our interviewee, Bill Scott, talking about the excitement of that year when he was just eighteen years old, just click on the arrow to hear him:

THE MAN BEHIND THE IMAGE.

The iconic image of Edward I, which is now forever associated Carlisle’s pageants (even the most recent pageant parades), has the Festival of Britain logo printed on the bottom right hand corner; but it is easy to overlook this small detail. 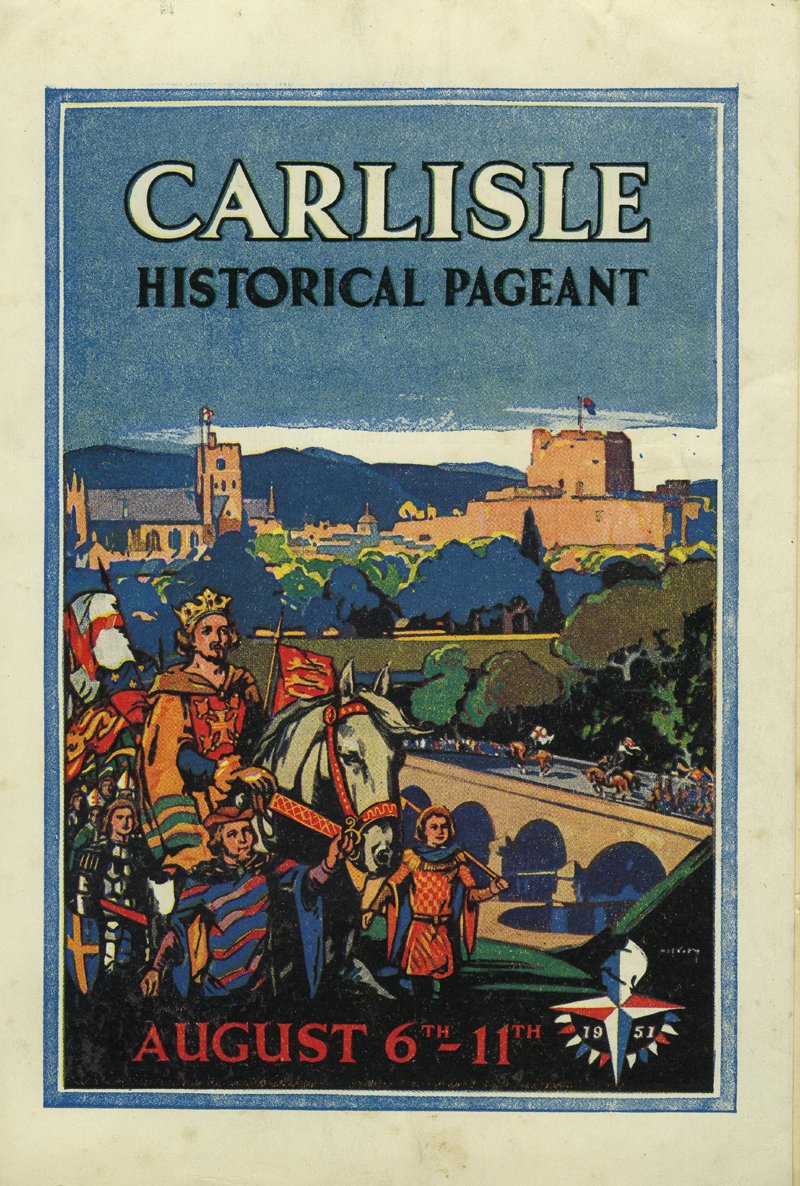 The famous image of Edward I arriving in Carlisle in 1307, which was used to advertise the 1951 Carlisle pageant.

The artist responsible for this image was Frederick George Meekley who worked as a graphic artist for the Metal Box Company in Carlisle. He was also a prolific and talented painter whose watercolours were regularly exhibited in the city and elsewhere. His best-known works were landscapes of Cumbria.

Meekley's well-known poster image of Edward was, very sadly, one of his last creations as he died later that year. His work can also be seen on a souvenir tin produced in tandem with Carlisle's 1951 Civic Week and pageant. This item is now very collectable (check out eBay and see for yourselves!) 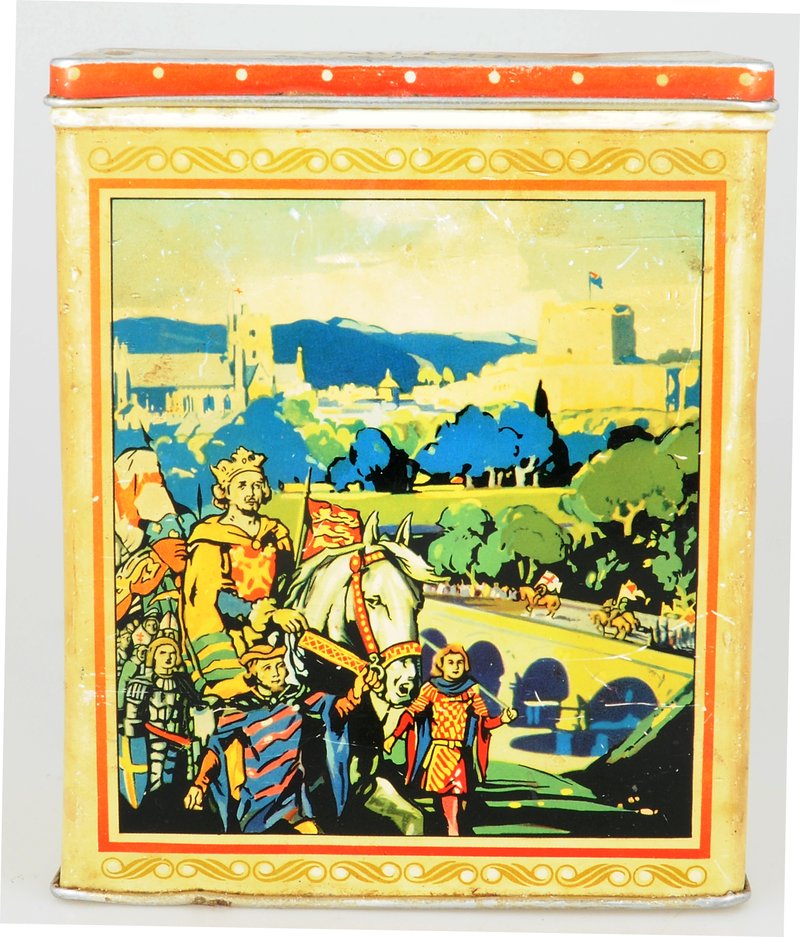 Originally, this decorative tin would have contained biscuits made by the well-known firm of Carr's that was based in Carlisle. During the mid-nineteenth century, this was one of the largest bakery businesses in the UK. The company was bought over by McVities in 1931; this was the end of an era for Carlisle because Carr's had always been locally owned. However, when United Biscuits acquired McVities in 1972, they retained the name of Carr's for its most famous product - Carr's water biscuits. These had been the firm's signature recipe and the biscuits were originally intended for sailors. Made without any fats, the water biscuits stayed fresh on long voyages. Of course, it didn't take long before they were enjoyed beyond the high seas!

The visit by Princess Margaret to Carlisle during Civic Week is well documented. Her photograph and descriptions of her fashion choices during the week were splashed all over the local press. Her attendance in Carlisle also meant that the city's festivities made it into the national newspapers, spreading the news about Carlisle's Festival contribution even wider. However, those people who recall her time in Carlisle can tell us some little known or at least, often-forgotten facts about this time.

In the 1950s there was much more mystique about royal figures than there is now and one of the things that surprised many folk was the Princess's diminutive stature!  Here is Ken Ogilvie who played Bonnie Prince Charlie in the pageant, recalling his sight of the Princess:

Liz Balmer who was a child performer in 1951 was very excited about seeing the Princess. Liz's father was a well-known musician in Carlisle and he was part of the pageant's orchestra: he played the double bass. This is not exactly an easy instrument to transport! But Liz's dad found a way of avoiding this as you'll hear:

In 1928, many aristocrats had taken part in the pageant as performers; this wasn't the case in 1951. Although the upper classes continued to have a presence as benefactors and sat on the pageant's 'Grand Council' they weren't quite so visible on the pageant arena. However, in the final episode which featured the Carlisle Great Fair and the runaway couple en route to Gretna Green, the character of John Peel was played by one of his direct descendants! 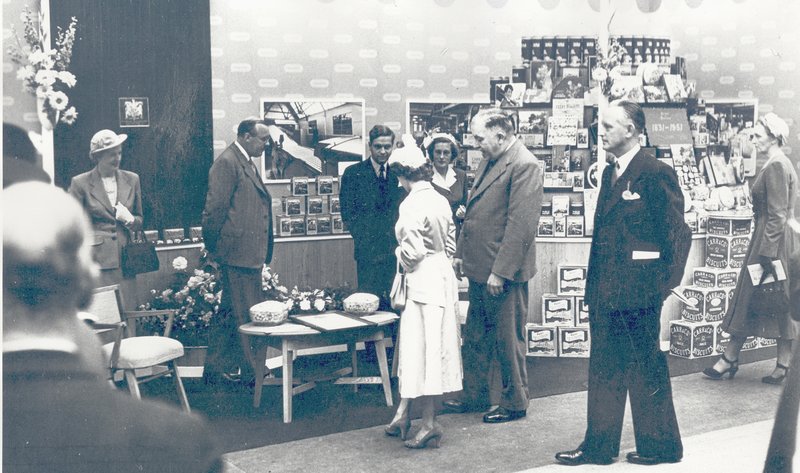 Princess Margaret photographed visiting the Industrial Exhibition. Carr’s biscuit tins can just be seen in the background on the display.

MAKING A NIGHT OF IT!

Carlisle really went to town with evening festivities during the 1951 Civic Week. Every evening there was a Searchlight Display by the Armed Services with massed bands, displays of physical training, riding exhibitions by Cavalry Officers and even ‘cutlass swinging displays’ performed by men from H.M.S. Nuthatch.  The war may have been over, but people were still keen to see the Forces in action, albeit from a comfortable seat in the grandstand!

Tradition was also honoured with country dancing displays, including some from over the border in a ‘Tartan Parade’. The legacy of Irish immigration to this part of England was acknowledged with a show put on called ‘Erin’s Green Isle’, which was described as a ‘fantasy of Irish songs and dances’.

In the middle of the evening programme, there was ‘community singing’ in which the audience could join in with the Carlisle Accordion Band under the direction of Mr A. Philpot. In these days when the radio was still the most popular form of entertainment in the home, everyone seems to have known the words to songs such as: 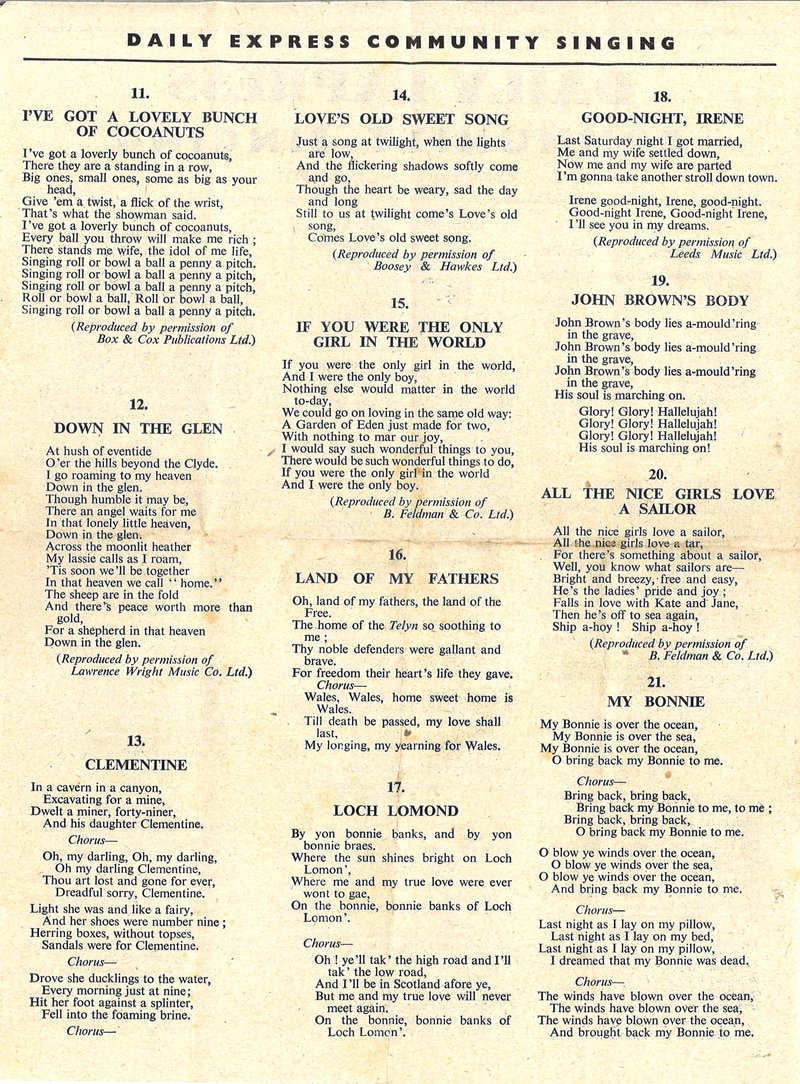 Community singing events were sponsored by the Daily Express. The session started at 9.15 following displays and lasted for half an hour finishing at 9.45 in time for the Searchlight Displays. This image from the  original programme is reproduced with the kind permission of Ken Ogilvie.

A Festival of Border History: the Carlisle Pageant, 1951.