Let's begin at the beginning...

Pageants developed out of older theatrical formats but when the very first, modern historical pageant was held in the little town of Sherborne in Dorset in 1905, it caught the imagination of towns and cities across the UK. Soon pageants were being held up and down the land. It was quite a few years before Carlisle took the pageant plunge, but when it did so, it really went to town in order to put the Border city on the map!

The year 1928 saw Carlisle hold its very first, outdoor historical pageant on a similar model to Sherborne (although Carlisle's was much bigger!) However, it has come to light that there was a predecessor of sorts. This was a theatrical event held in the now demolished Her Majesty's Theatre in the city, in 1920. 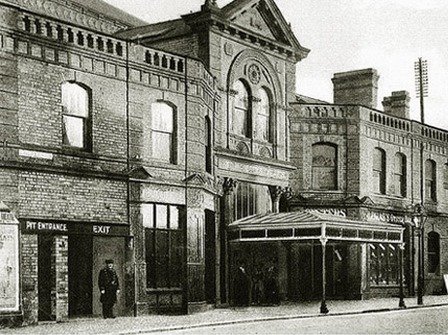 It featured many of the characters who would become regulars in Carlisle's outdoor pageants, such as the Emperor Hadrian, St Cuthbert and Mary Queen of Scots.

Very little information has so far come to light about this stage show so if anyone out there can provide some information please let us know by clicking on GET INVOLVED on the homepage of our website.

You will be doing us a great favour, as this event was the clear precursor to the CARLISLE GREAT PAGEANT of 1928 held in Bitt's Park.

Here are some interesting facts about the 1928 pageant in Carlisle:

➢ Bitt's Park wasn't the first venue in the city to be considered. Members of the pageant's organising committee also suggested Rickerby Park and the Greeny Bank. However, Pageant Master, Frank Lascelles opted for the Sauceries at Bitt's Park, near the centre of Carlisle. As we all know, this a place that is full of history.

➢ The pageant had two scriptwriters. The first of these was Mr J. S. Eagles. We don't know what his qualifications were for undertaking this task, but at this time he was a very important man in Carlisle as the Manager of the State Management Scheme, which brought all of Carlisle breweries and public houses into state ownership.  Mr Eagles got himself a new job however, before the script was completed and so a local historian named W. T. McIntire completed the pageant. Neither of the writers received very much acclaim for their work but McIntire evidently enjoyed the experience! He went on to be involved with more pageant scripts including that for the 1937 Chester Pageant. McIntire was a prolific author and during the 1930s, he also regularly contributed articles to the Cumberland News. 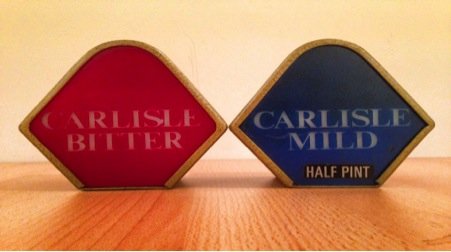 ➢ Planning for the pageant began in earnest in October 1927 and the Pageant Committee met thereafter every second Wednesday, after the working day, at 5pm sharp! But there were many more sub-committees looking after different parts of the pageant and for the members of these, planning and meetings were constant right up until the performances began in August 1928.

➢ In 1928, the most expensive tickets to the pageant cost 11 shillings and sixpence (that's a whopping £31 in today's money!) There were cheaper tickets costing as little as three shillings and sixpence (work that one out if you can in today's money!) but at this time, since the average weekly wage for a man was likely less than 20 shillings (and much less for women) a ticket for the pageant's grandstand was a bit investment. 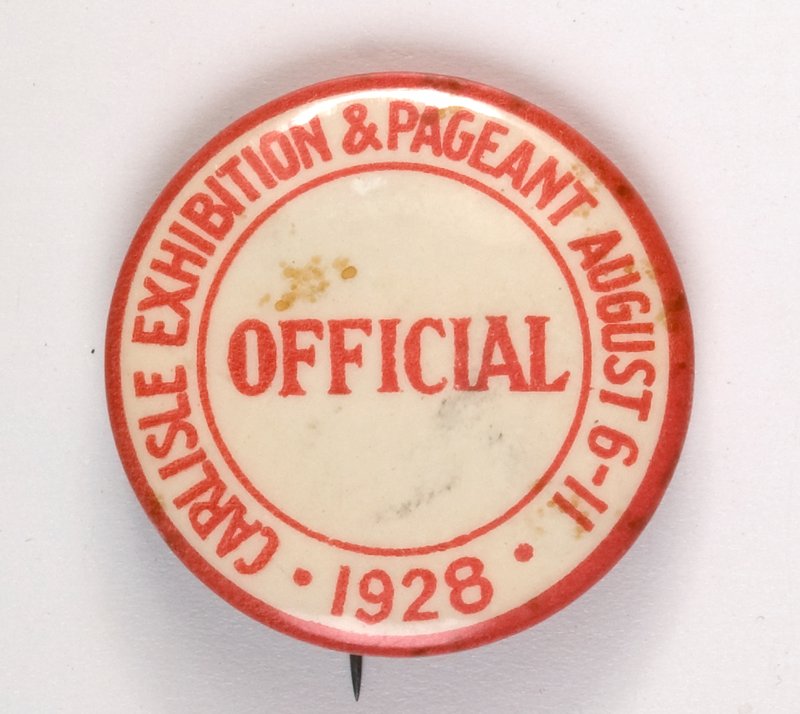 ➢ Volunteers who acted as stewards saw the pageant for free, probably many times! For most folk though, the only option was a place in the standing enclosure which cost a halfpenny. Probably more than worth the money, but it required stamina as the performance lasted over three hours.

➢ The 1920s were a difficult time and many people (perhaps even most people) could not afford a reserved seat at the pageant. So it was agreed that cheap reservations should be made available for the dress rehearsals. There were six of these rehearsals, with most seats costing only 1 shilling. If you were lucky enough to get one of these sold-out tickets, it was always possible that you would see a whole performance without any hiccups! 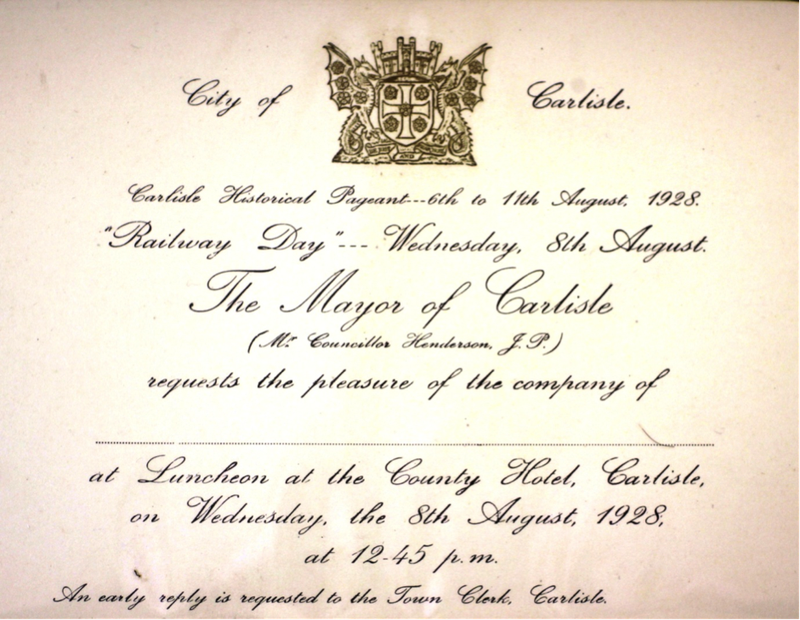 A special invitation to lunch with the Mayor during Carlisle pageant week.

➢ DO YOU REMEMBER?

Many people in Carlisle will recall the Silver Grill Bakery and Restaurant and its famous Pageant Hall.  Opened in 1896 at 39-43 English Street, Carlisle it did 'Luncheons, Teas, Dinners' and 'Functions of every description' and had dining accommodation for 300.

Following the great success of the 1928 pageant, this Carlisle institution commissioned paintings of some of the most iconic scenes from the performance. These lined the walls of one of the restaurant’s function rooms which was renamed Pageant Hall in honour of the images.  Sadly, the Silver Grill closed its doors in 1964 and the fate of its pageant paintings is unknown. No surviving prints of the originals have been discovered, but from a pamphlet written by one of the authors of the pageant, W. T. McIntyre, we do know that there were at least eleven paintings. The first showed Princess Mary attending the pageant amidst a host of local dignitaries.

Other paintings depicted the arrival of Hadrian, the dying Edward I dispensing terrible justice to members of the Bruce family, and, of course, the daring escape of Kinmont Willie!

The paintings may have long gone, but like the pageant, memories remain! Many local people had their wedding receptions in this function room. We’d love to hear from anyone who recalls enjoying tea and cake amidst the splendours of Pageant Hall! 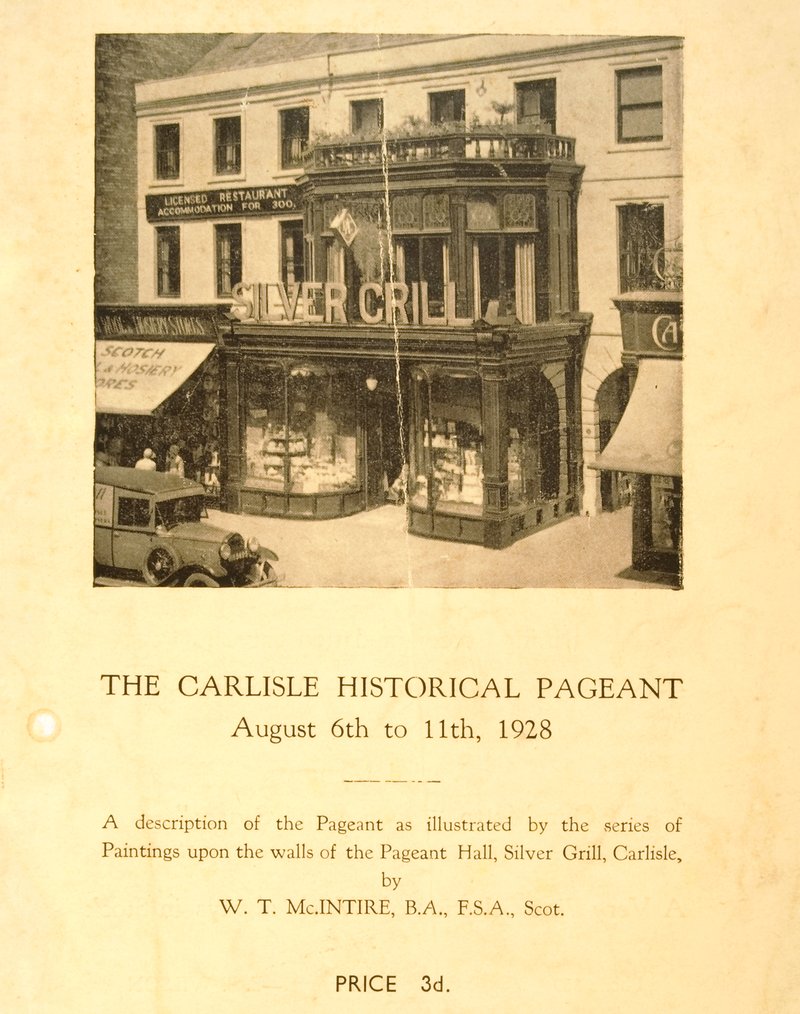 The famous Silver Grill Restaurant in Carlisle during its heyday.

➢ ALL DRESSED UP!

Photographs of the pageant show how lavish many of the costumes were and the amount of effort that went into getting the detail of these right and making them as historically accurate as possible.

This reminds us of the skills that so many ordinary people (mostly women) once had. Sewing skills were considered an essential part of education in the days before low cost, high street shopping  made getting an a new outfit every week a reality. This expertise made it possible to produce such wonderful costumes on a limited budget. You can see an example of one such homemade costume at the exhibition at Tullie House. The example that has survived is of a Page's outfit. The small boy (or girl) who wore this took part in the Mary Queen of Scots episode. 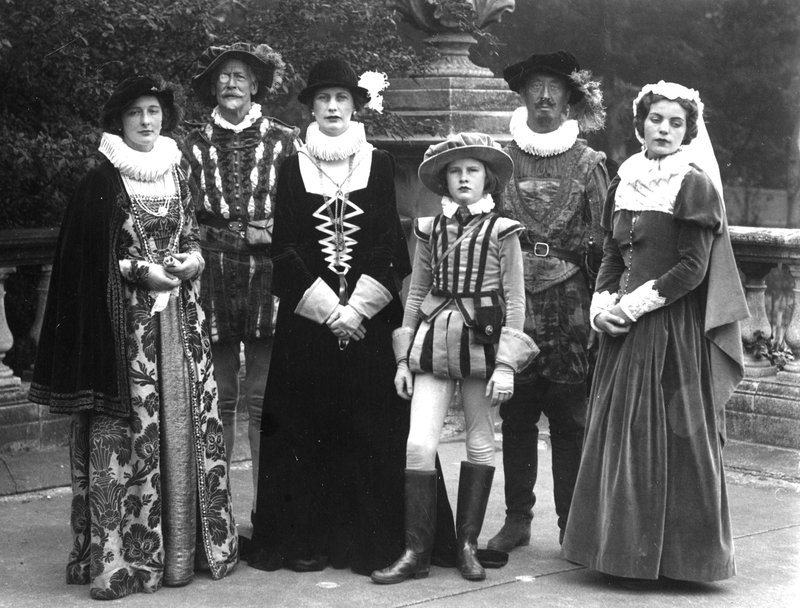 Performers who took part in the Mary Queen of Scots episode pose here. Lady Carlisle was in the title role. The Page seen here is wearing a similar type of costume to that which survives in the collections at Tullie House Museum.

Performers in the star roles obtained specialist costumes from theatrical costumiers. However, most of the 4000 people who took part either made their own costumes, or had these made for them by the army of local women who volunteered as seamstresses during pageant preparations. Some help was at hand though, as we can see here: 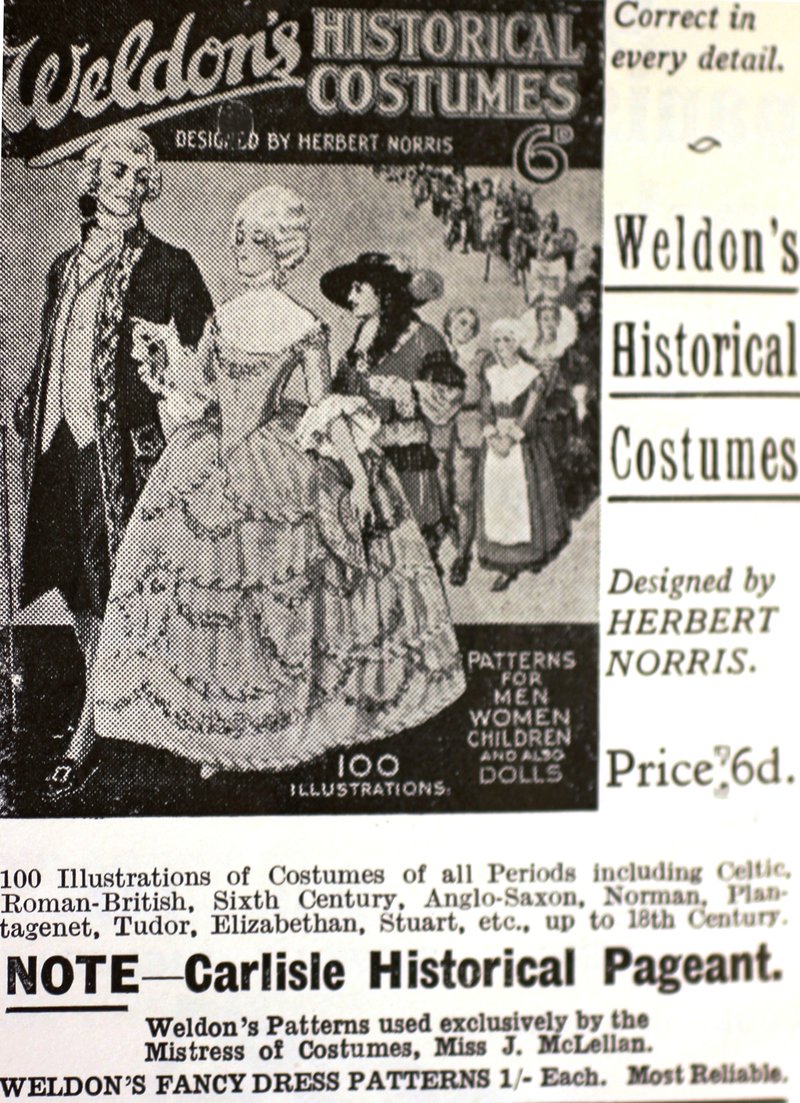 Advertisement included in a pageant programme in 1928. The craze for pageants during the earlier part of the twentieth century must have been a big boost for firms such as this one, which made paper patterns for historical costumes. Herbert Norris who is mentioned in this advert produced numerous books on costumes through the ages. These  hugely popular publications had many imprints (and are still in print now!); it is clear they were a huge influence on costume design where pageants were concerned.

No pageant ever took place without mishap. Often accidents involved horses, which were an important part of the spectacle. One of Carlisle’s most documented in 1928 took place during one of the dress rehearsals when Lady Carlisle’s understudy - Miss Stuart – fell off her horse when it was entering the arena. Despite being injured she carried on to the end of the performance in order not to disappoint the audience of schoolchildren. Miss Stuart was the daughter of the Dean of Carlisle Cathedral, Dr Venn Stuart who of course played Father Time! 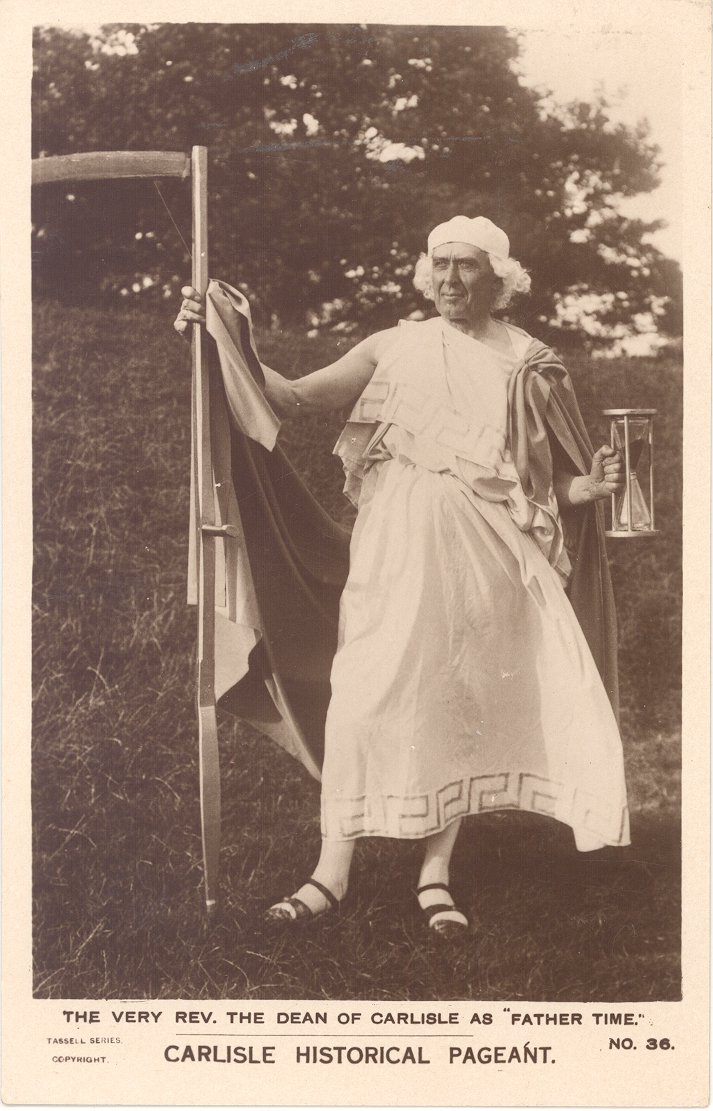 Dr Venn Stuart, Dean of Carlisle Cathedral in the role of Father Time. It is clear he relished the task and entered into the pageant spirit! Image courtesy of Tullie House Museum, Carlisle.

Newspapers gave the opinion that, aside from warfare, the Civic Week and pageant were the city’s largest ever collective endeavour.  Certainly, the events involved groups who had a high profile in the city such as the Railway workers who took charge of the Roman episode. Other civic groups such as the British Legion, the National Union of Women, the Boy Scouts, the Girl Guides, local choirs and amateur dramatic groups, as well as regular and territorial members of the Border Regiment, all played important parts in the week and its success.

The Border Regiment seemed to have enjoyed playing the vicious Picts in episode II of the Pageant. Image courtesy of Tullie House Museum, Carlisle.

➢FESTIVAL CITY – AND ANOTHER INVASION!

As well as the Industrial Exhibition, the Pageant and all of the evening entertainments provided, Carlisle dressed up in its best for the week of festivities in order to welcome ‘an invasion of visitors’! Unfortunately, an image of the streets has not been recovered but the street decorations were said to be on a Venetian theme and streamers and lights were all coloured red and yellow. Even side streets carried bunting and the buses were bedecked with flowers. Up at the Castle there was also an exhibition of famous local relics as you can read: 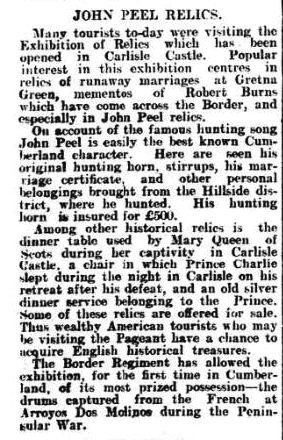 The appearance of local hero, John Peel at the finale of the pageant provided a happy ending. In this scene he has managed to help a runaway couple make it to Gretna Green.Image courtesy of Tullie House Museum, Carlisle.

We'd especially love to obtain an image of Carlisle's streets while it was en fete during the Civic Week. If anyone has such an image please get in touch just click on GET INVOLVED at

On 9th August 1929 pageanteers met up again for a post-pageant celebration one year on from the great event. The occasion was a grand fancy dress ball held at the Crown and Mitre Hotel in English Street. This hotel remains a famous landmark in Carlisle and it was a meeting place for all three Carlisle pageants. At the ball, the minuet composed by Dr Wadely (then musical director at Carlisle Cathedral) for the Edward I episode was played once again during the dancing. Lady Carlisle also arrived from Naworth Castle in full costume and the Mary Queen of Scots scene was once again performed. On this occasion, sergeants from the Border Regiment who were stationed at Carlisle Castle took part in the re-enactment of the episode.

Read more about the 1928 pageant on our Featured Pageant page where you will find a longer discussion of the impact made by this huge event.