A HAT TRICK FOR CARLISLE

Carlisle scored a hat trick when it staged its third successful historical pageant in 1977. The original plan was to use the same script that had been so successful in both 1928 and 1951, but when the pageant master, David Clarke, saw the script his heart reportedly sank. The original script was made up of very long and often ponderous verse, and Clarke quickly set about bringing it up to date. He did this by cutting the dialogue, changing much of the verse into prose and inserting five new episodes as well as cutting others entirely. The 1977 pageant therefore began at the same time as the others, with Hadrian and the Romans, but ended more recently, with an episode recounting the history of the King’s Own Royal Border Regiments from their formation in 1703 to the present day.

The running order for 1977 was as follows:

As well as a major reworking of the script and the introduction of new episodes, there was a change to the pageant venue in 1977 (Carlisle Castle replaced Bitts Park) and the narrator (a Chronicler replaced Father Time). Having the pageant take place in Carlisle Castle, where so much of the action depicted had actually taken place, created a real sense of the past coming to life for many. Andy Ledger, who was a young boy of 11 when he performed in the 1977 pageant, recalled:

A new method of amplification was also introduced. With the input of professionals from Border Television, the Chronicler's voice and the dialogue provided by the players were produced live by a collection of actors housed in a soundproof studio overlooking the arena and, with realistic sound effects, delivered via a four channel sound system. 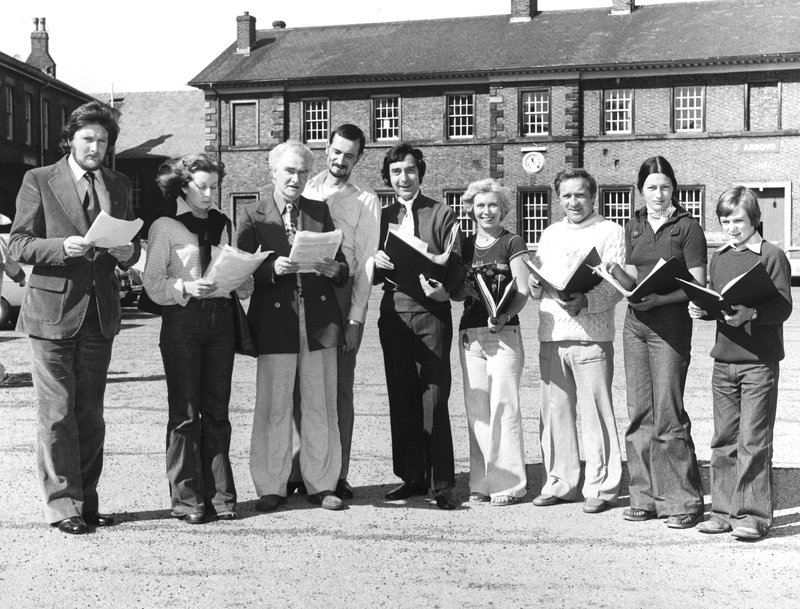 The voices for the 1977 Carlisle Historical Pageant. Steve Layden is pictured on our left.

The Chronicler was voiced by the well-known Border Television announcer, Clive Champney whilst one of those who provided the voices of those in the pageant was Steve Layden, then a secondary school teacher and active on the amateur dramatic scene, and now the Mayor of Carlisle! Here, Steve demonstrates some of his voices:

As well as the fondly remembered experience of providing voices for the performers in the pageant, Steve enjoyed an unexpected benefit from his stint as one of the voices in the pageant:

The idea of having a third historical pageant in Carlisle had come from Sir John Burgess, who had been appointed in 1976 to take charge of Cumbria's efforts for the Queen's Jubilee Appeal. Sir John was a well-known and influential figure in Cumbria, being chairman of both Border Television and Cumbrian Newspapers Ltd. The pageant was Carlisle's contribution to the Queen's Silver Jubilee celebration but it was also a part – many would say the highlight, that year – of the city's traditional, annual 'Great Fair'. This was a traditional custom that had fallen out of use, but which had been revived in 1975. It involved an 'olde worlde market' in the centre of the city, concerts, demonstrations and exhibitions, and in 1977, a fairground with rides and attractions held in Bitts Park (where both the 1928 and 1951 pageants had taken place). The pageant benefitted greatly from its connection with the Great Fair, as individuals involved in the Great Fair lent their support and expertise to the organization of the pageant.

Nigel Holmes, who worked for BBC Radio Cumbria, was the publicity officer for the Great Fair (from its inception right through to 1989) and, through this, was asked to join the publicity committee for the pageant. He recalled his role in the 1977 Carlisle Historical Pageant:

The car stickers that were produced for the Great Fair each year reportedly became something of a collector’s item in the area!

Although there were many fewer performers than there had been in 1928 or 1977, a still impressive 1000 or so performers made up of men, women and children took part in the 1977 pageant. A large number of horses also took part in most of the episodes, whilst a flock of goats and two dogs were included in episode III, a variety of animals in episode V, and a falcon in episode VI (Mary Queen of Scots).

A senior lecturer in dress design at Carlisle College, Caroline ‘Carrie’ McIntyre, had taken charge of costumes in January 1977 and quickly set to work designing many of the outfits used in the performances. An astonishing 2000 costumes were needed in total, and Carrie hired 300 of these (for the main parts) so a massive 1700 had to be made, all of which she designed. She was creative and inventive with her designs, as her experience of sourcing tights for the male performers attests!

For a great many episodes, more women than men had come forward, and women had taken on many male roles, including that of Bonnie Prince Charlie, who was skillfully played by the then 19-year-old Corrine Paton. 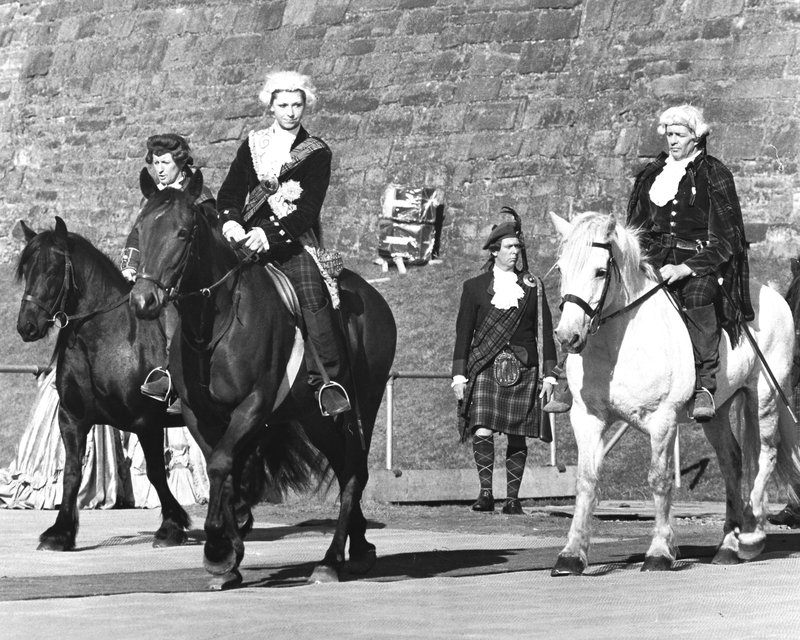 Paul McIntyre, who was stage manager for the 1977 pageant, put his military background to good use, not just in the organization of the stage, cast and so on, but in ensuring that the marching and handling of firearms appeared authentic. 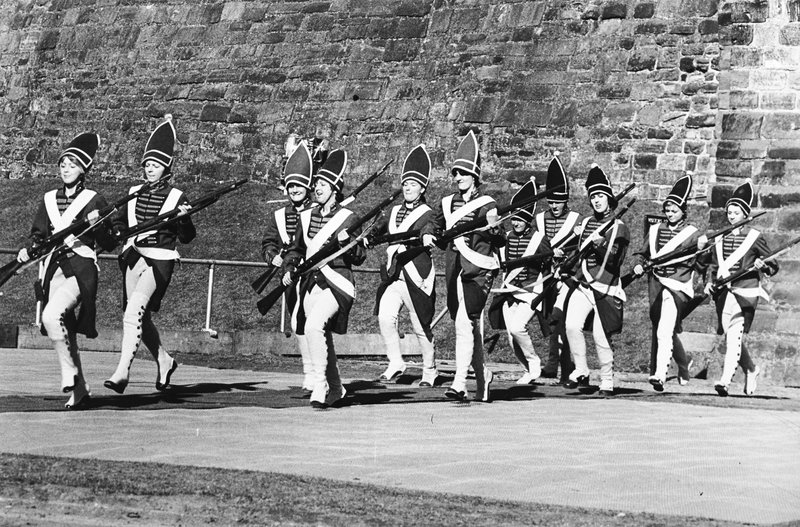 Paul also played the part of a redcoat in one of the episodes and recounted a ghostly tale that helps to demonstrate just how authentic the costumes were in 1977! 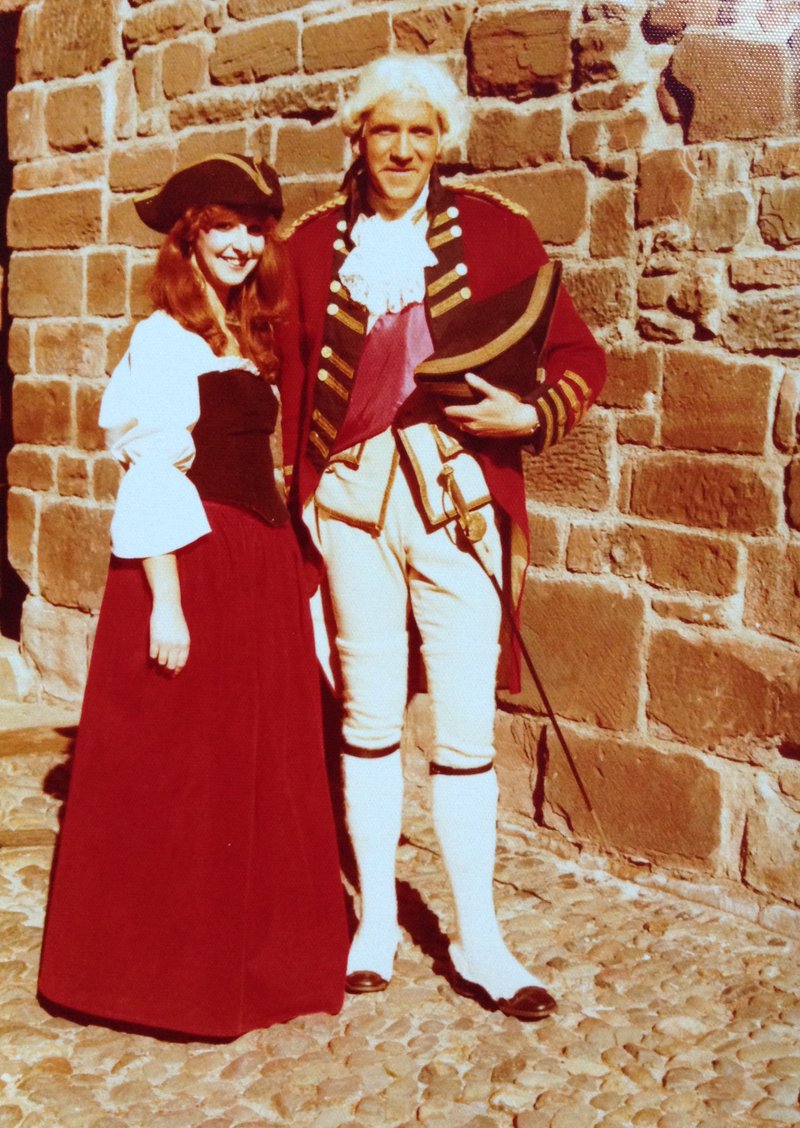 Paul and Carrie McIntyre in costume at the 1977 pageant.

A major aim of the pageant was to bring people in Carlisle together and to foster a sense of civic pride and community spirit, with people from all walks of life coming together and working towards a common goal. The pageant was very much considered a successful venture at the time, raising £2000 for the Queen’s Jubilee Appeal and attracting large audiences to all of the performances. A total of 2500 seats were available for each performance, with more reserved for invited guests! 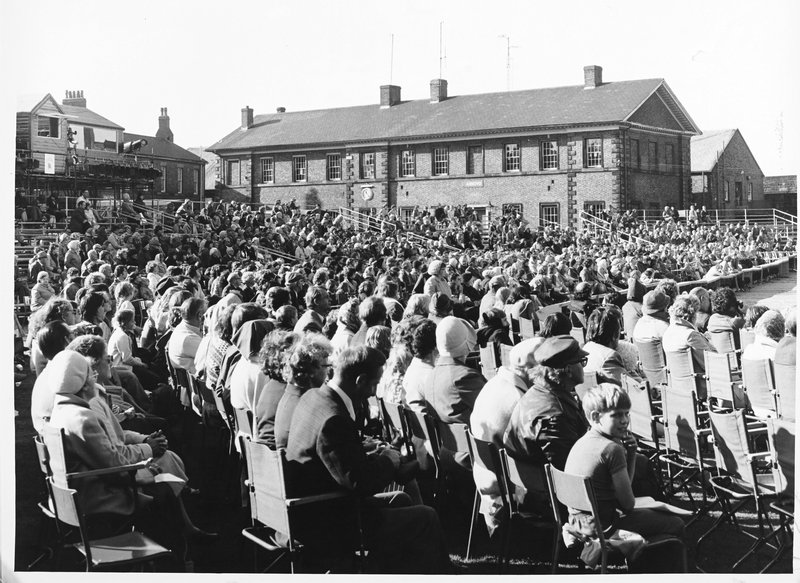 Audience pictured at a performance of the 1977 Carlisle Historical Pageant

After the pageant, Sir John declared the event a 'triumph' and evoked wartime Blitz spirit saying, 'more than one person told me... It was like the war years. Everyone mucked in with a spirit of fun and dedication'. In this way, the pageant was very much a ‘people’s pageant’ in the time-honoured tradition of historical pageants.

More Pageants for the Border City?

In 1977, Sir John Burgess had predicted that Carlisle would continue its run of successful pageants, saying in the Carlisle Pageant book 'when the Queen's Golden Jubilee is celebrated, another generation will find it useful when planning the Carlisle Historical pageant of 2002'. As we know, this was not to be – although a pageant of sorts was introduced in 2012 in the form of the annual pageant puppet parades.